It was a typical fall day in 2020 in August when we started the installation of the new site on top of Conway Peak which is above Conway Summit at the Caltrans maintenance station on US395 about 70 miles north of the town of Bishop, the largest city in the eastern Sierras on Highway US395.

The installation plan was for the three of us to head up to Conway at O’dark:30, our term for leaving early in the morning.  We had packed the three vehicles the previous day with the repeaters, transmit combiner, receiver multicouplers, power distribution panels, routers, site monitors, power supplies, batteries, battery trays, cables for the batteries, sync, oscillator, receivers & transmitters, equipment racks, antennas, antenna cables, brackets, clamps and anything else that we needed, so we were ready to head out in the morning 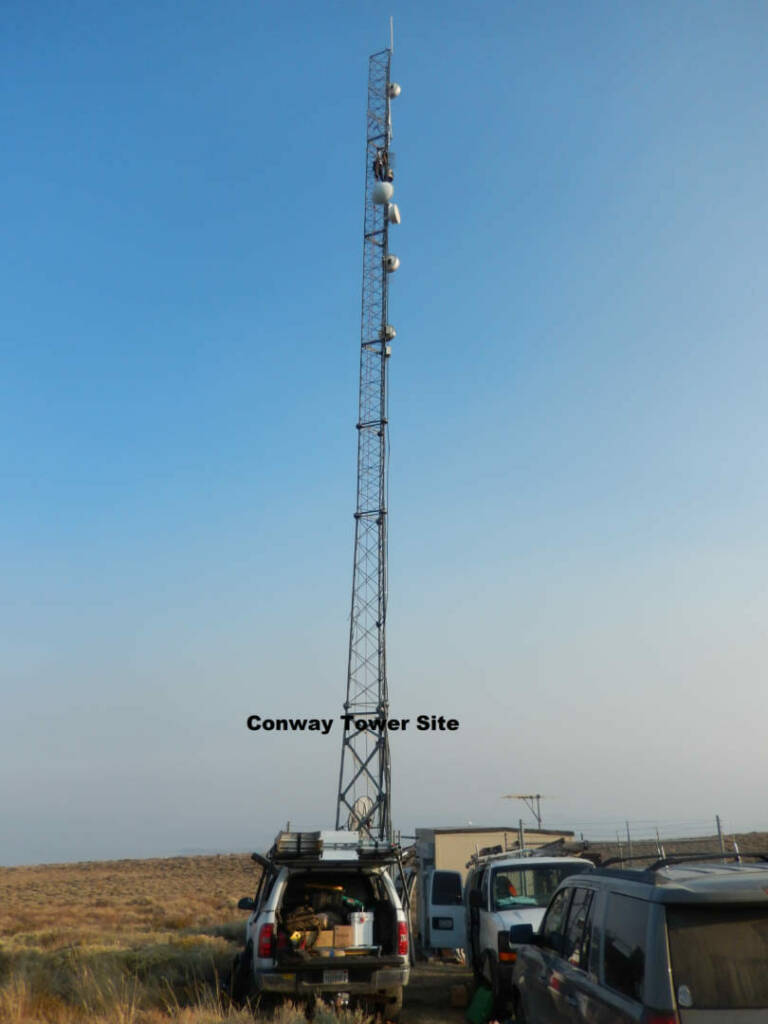 I headed north on the San Diego Freeway and so did Nick who had much of the equipment in his van.  David was coming from the Whittier area, so he headed up the 605 Freeway to the 210 Freeway and west to Interstate 5 and on to Highway 14.  Traffic was minimal at 5AM in the morning which allowed us to move along up the freeway at full speed most of the time with only minor slowing in some places.  We wanted to be out of the LA area by heading up California Highway 14 by 6AM which was an hour drive from where we started our trek to be ahead of the Los Angeles traffic.  We made it on time to the Sylmar area and continued north on Highway 14 until we reached Mojave where we stopped for a quick pit stop and to stretch our legs.  Back on the road and we drove another hour until we merged with US395 heading north and continued for another hour until we reached the town of Lone Pine where we made another pit stop to stretch.  After a short break, we continued heading north on US395 until I reached Bishop around 10AM.  David and Nick continued heading to the site while I stopped at Schat Communications to get a dish antenna to connect the site at The Westin Hotel by microwave to the network.  I then continued on to Conway Summit and up to the site at the top of the hill where we proceeded with the start of the installation.

David, Chris and Nick were already at work on the tower running the antenna cables.  The equipment was inside the building, but nothing had been assembled.  I went to work assembling the equipment rack, securing the rack to the building and then proceeded to mount the equipment in the rack piece by piece.  Like normal, I started at the bottom of the rack mounting the battery tray that holds the batteries.  I then worked my way up the rack mounting the transmit combiner, the power supply, the repeaters, router, power distribution, receiver multicoupler, site monitor and receiver filter.  I then installed all the cables between the various pieces of equipment. 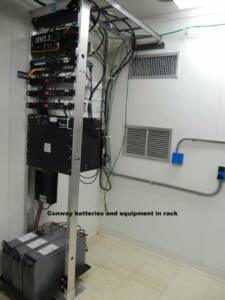 Once that was completed, I plugged in the equipment and turned on the system.  The repeaters started to boot up and after a few minutes, the repeater system seemed to be functional as a stand alone site because it was not connected to the network.  I grabbed my radio and turned it on.  I selected the Conway site and waited for the radio to log onto the network which it did within a few seconds.  I went outside to talk from my mobile radio to my portable radio and found that it worked, so I was pleased with our progress.  Now, we needed to get the network connection working so that the site was connected to the network.

David, Chris and Nick continued working on the tower getting the antennas and cables mounted and run into the building.  So I relieved David so that he could come inside and start the setup of the network connection while I took his place working with Chris and Nick.  We reused one existing feedline on the tower, but it was necessary to change the connector at both ends of the cable which had an EIA flange mount.  We had to change the connector to a Type N connector.  This was an air dielectric cable which we do not normally use, so we had to special order the correct connector for the cable.  We normally install connectors on the ground and then pull the cable up the tower with the connector already installed, but this time the cable was already on the tower so Chris had to install the connector on the cable up at the top of the tower.  This can be tricky when 100 feet up a tower and if you drop one of the pieces of the connector, it is likely to be lost forever.  We did not have a spare connector, so it was essential to be extremely careful not to drop any piece of the connector because that would cause us to be unable to complete the job without returning to the site with another connector.  That would prevent us from completing the job on this trip and necessitate another trip to the site which is a 7 hour drive from the office.

So with extreme care, Chris worked his way through the replacement of the connector and then connected the antenna jumper to the cable.  He was ready to seal the connection, but before that was done, I wanted to use our antenna sweep tester to verify the integrity of the transmit antenna and cable.  The antenna and cable tested out OK so I gave the word to proceed with sealing the connection.  Once the other cable was finished, I also ran the sweep test on the receive antenna which also tested out to be a good installation.  Now it was time for Chris to climb down the tower and finish securing the new cable to the tower as he climbed down the tower.  He got to the bottom of the tower and was taking off his climbing harness when I went outside the building and inspected the installation.  The transmit antenna was tilted instead of being straight, but Chris was not in the mood to climb the tower again at this time.  It was already past 5PM and the sun was getting low in the sky.  The wind was picking up and it was starting to get cold, so it was not the best time to climb back up the tower to straighten the antenna.

It was time  to leave the site, so we packed up our tools and headed south towards Mammoth where we would be spending the night.  We drove for 5 minutes down the dirt road to US395, turned left to head south and drove down the hill to Mono Lake.  We continued south past Lee Vining reaching June Lake Junction and continued south to Mammoth Lakes.  We exited the highway and headed to the house where we unloaded our suitcases, opened up the house, turned up the hot water, plugged in the water circulating pump and turned up the heat to warm up the house a bit.  After cleaning up, we headed out to dinner which was a welcome sight.  After lots of story telling, food and drink, we retired to the house for more libations, story telling and to watch some TV.  After another hour or two, it was time to go to sleep to be ready for the next day.

The next morning, David, Nick and Chris headed back to Conway Summit to straighten the antenna after stopping to get some breakfast at the Old New York Deli, one of our favorite places to get a fast breakfast.  I stayed in Mammoth for about 2 hours to take care of some business in Mammoth while the guys were heading north.  Eventually, I finished my business in Mammoth and left town and headed north to meet up with the guys.  While I was busy in town, they climbed the tower, straightened the antenna and climbed down the tower.  They put the climbing gear away and proceeded to head south before 11AM.  I was about ½ way to Conway Summit when I spoke to the guys on the radio at which point I was informed that they were finished and heading south towards Casa Diablo, the next tower site that we were about to install.  So I turned around at the first opportunity which placed me behind the guys who had already passed my location.