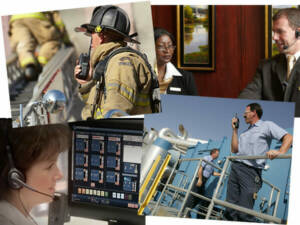 Analog –This is best suited for solutions that can obtain all required coverage from a single tower site or a few sites that are all in the radio coverage area of the business office, otherwise the office cannot reach the mobiles in the field. Any two radios that are attempting to communicate with each other must use the same tower site, otherwise they will not be able to communicate. Also, the customer must not have any need for the enhanced features offered by digital technology such as text messaging, caller ID, email or high efficiency GPS. Many Two-Way Radio users require only a simple, reliable and low-cost method of communication which is provided by the analog systems. Standard analog radios usually offer push-to-talk, scanning, simple group conversations (one-to-many), and limited encryption capabilities.

Trunked radios offer a considerable advantage over conventional radios.  In a trunking system, there are several repeaters located at the same site that are all tied together into a centralized radio system.  There is an automated system of assigning radio channels that keeps any two subscribers from being on the same channel at the same time, so that the radio user has the equivalent of having a private channel.  This is equivalent to having a VPN with your computer system which provides you with the virtual private network so that you have the equivalent of a private and secure network while still sharing with other users.

The Blocking Probability Chart above represents traffic on a five-channel trunked system.  The channels represented are approximately fifty percent loaded, meaning the channels are occupied by a radio signal 50% of the time.  The colored area represents “in use” repeater time, i.e. when blocking would occur.  If the channels were not trunked such that only one channel was available to a user, as in the case of a conventional radio repeater, the user would have only a fifty percent chance of obtaining the use of a channel at any arbitrary instant in time.  However, if the user is permitted to select a free channel, the probability of being denied access or getting blocked at any instant is greatly reduced.  Compare line six to any of the other five channels.  Line six represents the time when there is no channel availability when looking at all five channels together rather than one channel at a time.

The repeater requires the use of two frequencies, one for transmit and one for receive, otherwise known as a channel pair.  The repeater receives the transmission from the base station in the office or the mobile radios by listening on frequency A, the same frequency that was used by the radios to transmit.  Whatever the repeater hears is rebroadcast on frequency B, the other half of the channel pair.  All the radios listen on frequency B, so they are listening to the repeater transmitter (which is located at some high site which will produce better coverage than the mobiles talking directly to each other) and not directly to the transmitter of the mobiles and portable units.  With the repeater, all the mobiles (and hand-held portable radios) can get the same range as the base station at the police station.  The same principal applies to any other business entity that chooses to use radios as the police dispatch.

Conventional repeaters operate on a single channel pair, typically (but not always) on shared frequencies.  Therefore, with a conventional repeater system, it is like a home telephone line in which you cannot make a call on the phone if someone else in the house is using the phone.  It is a more economical service, but it is a lower grade of service to which many entities are not willing to tolerate.  The need for communications often requires immediate use of the radio which makes people prefer trunked repeaters so that instant access can be obtained.

MRA has many conventional repeaters at locations throughout Southern California and the L.A. area.  Contact our offices to find out what repeater locations we offer and if we are willing to install a repeater just for your operation.

MRA has analog LTR trunking located at 9 key sites around So. California.  Each of these sites have been chosen to provide the best coverage available from key locations that are considered by most radio users to be the best of the best.  The maps depicted below show the radio coverage for all radios in green and for mobile radios in blue.  Mobile radios will always provide the best performance while portable radios will provide communications while away from a vehicle or inside of a building, but will always have less coverage than a mobile radio due to the factors discussed in the article “How Far Will My Radio Talk?” which is located elsewhere on the website.

DISCLAIMER:  In the maps immediately following, the green area represents the areas where all radios will work.  The turquoise blue areas require the use of a mobile radio to have usable radio coverage.  The white areas of the map do not have any usable radio coverage.  All of our maps tend to be a little conservative, so you should be able to obtain coverage that is equal to or better than what is predicted.  However, since the maps do not take into consideration local man made obstructions and trees, there may be some areas where the performance is below the predicted levels.  A good rule of thumb is that the maps are about 90% accurate, but you cannot rely on absolute accuracy and we cannot guarantee coverage to be consistent with the performance indicated on the maps.  If in doubt about the coverage, ASK FOR DEMO EQUIPMENT TO TRY OUT THE SYSTEM.

The following maps depict the MRA analog site coverage in greater detail than the maps above.  There are eight main color levels of signal quality along with different shades of the various colors which shows gradual changes in signal strength.  Each color (such as from red to yellow, yellow to green, green to turquoise, turquoise to blue etc.) represents a signal strength reduction of ten times weaker except the color change from magenta to red which represents one thousand times weaker signal.  Mobile Radios will work well down to the dark blue areas, have some issues in the grey areas and not work at all in the white areas.  Portable radios will work well down to the green areas and start experiencing some difficulty in the turquoise areas.  Using a portable radio while inside a moving vehicle will have difficulty in the turquoise area and is typically not possible in the blue areas.  To use a portable radio in the blue areas, one must exit the vehicle and find a “hot spot” and stay in the hot spot to communicate with the radio.  Please see the discussion in the article “How Far Will My Radio Talk?” which is located elsewhere on the website.

DISCLAIMER:  In the maps immediately following, the various colors represents areas of different performance.  All radios will work extremely well in the magenta areas, very well in the red areas, work well in the yellow areas and work reasonably well in the green areas.  The turquoise blue areas are a bit unreliable for portable radios and very unreliable in the blue areas, but mobile radios should work well.  The gray area is marginal coverage for a mobile radio and the white areas of the map do not have any usable radio coverage.  All our maps tend to be a little conservative, so you should be able to obtain coverage that is equal to or better than what is predicted.  However, since the maps do not take into consideration local man-made obstructions and trees, there may be some areas where the performance is below the predicted levels.  A good rule of thumb is that the maps are about 90% accurate, but you cannot rely on absolute accuracy and we cannot guarantee coverage to be consistent with the performance indicated on the maps.  If in doubt about the coverage, ASK FOR DEMO EQUIPMENT TO TRY OUT THE SYSTEM.

Get in Touch With US