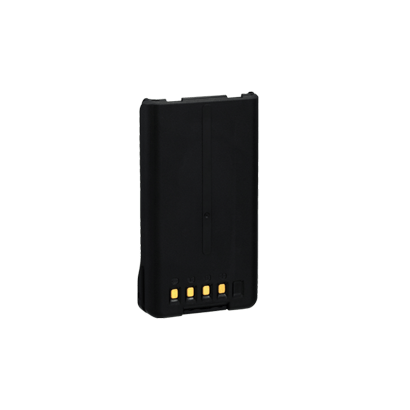 There are four different battery chemistries in use today.  Three of them are in current used for new equipment and one is an older technology used in legacy radios.  These are:

Nickel Cadmium is the oldest of the battery technologies.  Current production radio equipment does not use Ni-Cd batteries, but they exist in many older legacy radio systems.  The battery is becoming far less popular due to the Ni-Cd memory effect which is very pronounced with these batteries.  When you use 40% of the battery capacity repeatedly, eventually the battery only has 40% of its original capacity.  There is some ability to recover some of the capacity through conditioners, but it generally will never recover 100% of the original capacity.

Nickel Metal Hydride is a better battery chemistry which has replaced most Nickel Cadmium batteries in legacy radios.  Ni-Mh batteries do not develop the deep battery memory like Ni-Cd batteries, but we find that they will also do it to some extent.  They are more tolerant of abuse than Ni-Cd batteries.  They tend to be heavy batteries which is an undesirable feature.

Lithium Ion battery is the current and most popular battery chemistry in use today.  They do not tend to develop memory and they are extremely light weight, thus making them a better battery technology.

All batteries are rated for capacity in terms of how much current the radio can supply for a period of time.  The unit of measure is amp-hours which are used for larger batteries such as car batteries and batteries for UPS systems that keep your computers working during power outages that last about 15-45 minutes.  Fifteen amp-hours is a battery that can supply 7.5 amp of current for two hours.  Batteries for portable radios are measured in smaller units which are milliamp-hours.  An example of this is a medium duty battery for the Kenwood NX-300 portable radio which is 2550 mAh (or milliamp-hour) and will provide 255 milliamps for 10 hours.  Therefore, you cannot tell how long the battery will last unless you know the capacity of the battery and the amount of power that is drawn by the load that is being powered by the battery.

Radios do not use the same amount of current for all operations.  As an example, a radio may use 15 milliamps during standby which is when the radio is turned on and waiting for someone to call, but no one is talking.  The same radio will use anywhere from 50 milliamps to 150 milliamps depending upon the setting of the volume control while it is receiving a transmission.  When the transmit button is depressed, the same radio will draw between 750 milliamps to 2000 milliamps depending upon the output power of the radio.  Therefore, a small amount of talking time equals a lot of listening time and even more standby time.

Batteries for portable radios are rated by the ratios of time that the battery is used for the different functions.  The two most common ratings for battery comparison are:

Therefore, when you compare battery life of radios, you need to know which one of the scales are used and compare batteries on the same scale.

There are several types of chargers for batteries.  They start with trickle chargers that charge the battery very slowly.  These are the most economical chargers, but they can easily ruin a battery if you do not take care to remove the battery from charge when it is fully charged.  Rapid chargers are the most popular type of battery charger which will charge the battery rapidly until it is typically 80% charged, then switch to a slower charge to finish the charge cycle.  Once the battery is fully charged, the charger typically switches again to a trickle charge.

There is a third type of battery charger that is used in the more expensive radio systems, typically when the user of the radios had hundred or thousands of radios.  These batteries have a computer chip inside the battery pack that stores information about the condition of the battery, how many times it has been charged, the serial number of the battery, who is using the battery, its current charge level, its current capacity compared to when it was new, etc.  When you place the battery in a compatible “smart” charger, the battery information is transferred to the charger which is connected to a computer LAN.  The battery and charger both communicate with a central computer that keeps track of these parameters so that the health of the batteries for the entire system can be monitored from a single location.  This eliminates the biggest problem in portable radio systems.

Each battery manufacturer and battery charger manufacturer will design their battery and charger differently than another manufacturer.  The procedure described herein is for a typical Kenwood rapid charger. The following is the best procedure to follow when charging and storing batteries:

I hope that this discussion of battery treatment is informative and will help you get maximum performance from your fleet of batteries.