There are 3 versions of the Morse Code depicted below courtesy of Wikipedia: 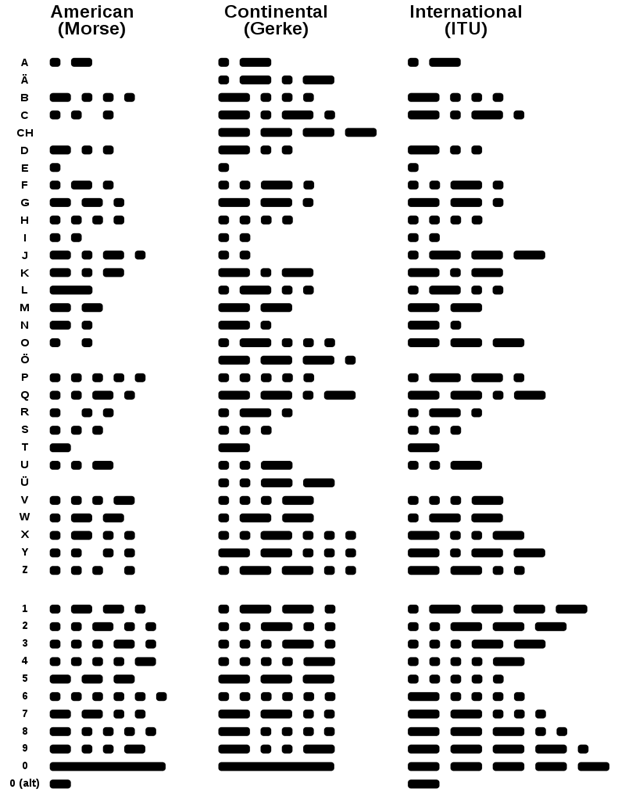 As an interesting note, you will hear the American Morse Code at the New Orleans train station in Disneyland.  It is being sent continuously all day every day at the park.  The code is sending the first two sentences of the original speech by Walt Disney the day that Disneyland was opened.

“TO All WHO COME TO DISNEYLAND,
WELCOME.
HERE AGE RELIVES FOND MEMORIES OF THE PAST,
AND HERE YOUTH MAY SAVOR THE CHALLENGE AND PROMISE OF THE FUTURE.”

The balance of the speech states:
Disneyland is dedicated to the ideals, the dreams
and hard facts that have created America…With
the hope that it will be a source of joy and
inspiration to all the world.
July 17, 1955

The entire speech can be viewed and is recorded for posterity in a gold colored plaque at the base of the flagpole in town square at Disneyland.  If you wish to see more interesting things about Disneyland, please visit the website:

Another interesting note in history radio was the time the message sent by the Titanic on April 14, 1912 when it struck an iceberg and began to sink.  The message was sent via the primitive radios used in those days.  The actual message received is depicted below: 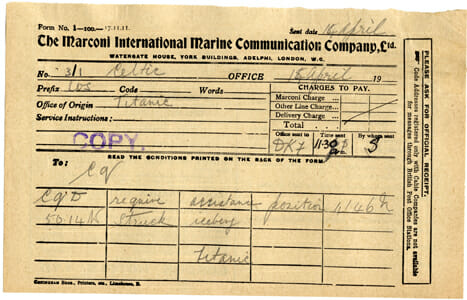 (Courtesy:  Museum of the History of Science, Oxford)

The nearest ship was the “Californian” which never heard the message because they had turned off the radio for the night as it was anchored 19 miles away.  The ship “Californian” could have rescued everyone on the Titanic if they had heard the message from the Titanic.  The ship that responded was “The Carpathia” which was 58 miles away and took 2 hours to arrive.  By that time, many of the passengers of The Titanic had already perished.

The person who worked at The Marconi International Maritime Communication Company, Ltd. that picked up this message and attempted to bring it to the attention of the authorities was David Sarnoff, a Russian immigrant.  David eventually left the company and even though he had a limited education, eventually became the president of RCA, which was the Radio Corporation of America because he had the foresight to see how important radio would become to the everyday lives of the United States of America and the people of the world.