Stuck on the San Diego Freeway

Back in 1983 when our company was young and considerably smaller than we are today, I had to go to Mt Lukens to perform some service work on our repeaters at Mt Lukens.  I spent a good portion of the day at the site working on the repeaters and finally left the site around 5PM.  At the time, I was living in the West LA area, so after driving down the dirt road and getting to the 210 freeway, I headed south on the 2 freeway and west on the Ventura Fwy to the San Diego Freeway where I headed south towards the West LA area. 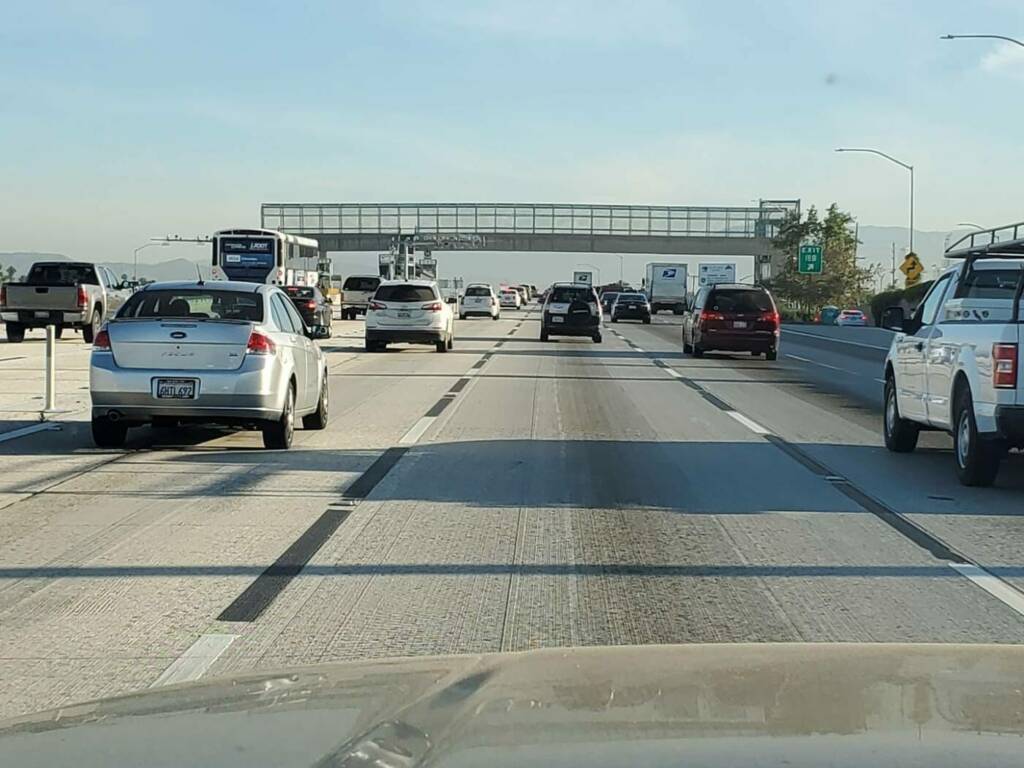 When I was in the middle of the Sepulveda pass where I had no radio coverage from my two-way radio, my tire went flat while I was in the number 1 lane. Cell phones were non-existent as they came to Los Angeles in 1984 just before the Olympics came to town.  There was construction on the freeway at the time and the center lane was closed off.  The only thing that I could do was to pull into the center of the freeway because with the problem of the tire blowout, I could not cross the several lanes of traffic and maintain control of the vehicle to get to the shoulder of the road.

When my vehicle stopped, I exited to check out what happened.  I found that the tire blew the retread cap.  I had a spare tire, so I proceeded to change the tire.  The van had a scissors jack which I placed under the rear axle to lift the van so that I could change the tire.  As I started jacking up the car, the jack broke and now I did not have a way to change the tire.  I pulled out the jack from under the vehicle and found the problem with the jack.  I attempted to fix the jack and managed to repair it to the point where I thought that I could use the jack.  However, when I placed it under the vehicle, I could not get the jack to lift the vehicle.  After removing the jack again, I determined that the jack would not work if it was fully down, but would work if it was extended a small amount before applying the weight of the vehicle.  Unfortunately, when extended a small amount, I could not get the jack under the vehicle.

I tried to flag down someone to stop for over 45 minutes.  No one would stop, including the CHP vehicles that passed me.  I was stuck in the center divider of the freeway unable to get help and unable to call for help on the radio.  I felt that I would have to solve my own problem since no one appeared to care about my predicament.

I started walking in one direction to see what debris I could find that might help me.  I walked for over a ½ mile heading south and found nothing.  (Try walking for a ½ mile on the freeway today and see if you do not run into lots of debris.)  I then turned around and walked north back to the van while trying to get someone to stop to no avail.  I continued past the van heading north in the center divider continuing to try to get someone to stop while looking for something to use.  After about ¾ mile past the van, I found a piece of wood lying in the middle of the center divider.  I realized that I could use this to get the tire changed.

I walked back to the van and placed the wood in front of the tire.  I got into the van and drove forward just far enough for the tire to crawl up on the wood, raising the vehicle just enough so that I could use the jack to raise the vehicle.  I jacked up the van after breaking loose the lug nuts.  After the tire was off the ground, I removed the lug nuts, changed the tire and lowered the van back onto the pavement.  I bolted the spare tire onto the tire carrier on the rear of the van, put the jack away and proceeded to merge into traffic after having to wait several minutes for a break in the traffic.

I arrived home at 9PM instead of 7PM.  I was exhausted from a hard day’s work and had no trouble going to sleep after having something to eat for dinner.  The work continued the next day as normal.

The tires on my van were only one week old.  This was the first time that we tried using retread tires.  The cost savings of using the retread was quickly lost when the tire blew and the problems associated with the incident.  This was a case of being penny wise and dollar foolish.  That was the last time we ever purchased a retread tire.