A Shakey Day at Santiago Peak

It was a nice Thursday morning on October 1st of 1987 when Randy and I were headed to Santiago Peak to replace an antenna.  I started the day by leaving the house at 4:30AM to meet Randy at the office around 5AM so that we could head to Santiago Peak early in the day.  We were expecting it to be a nice day on the tower. 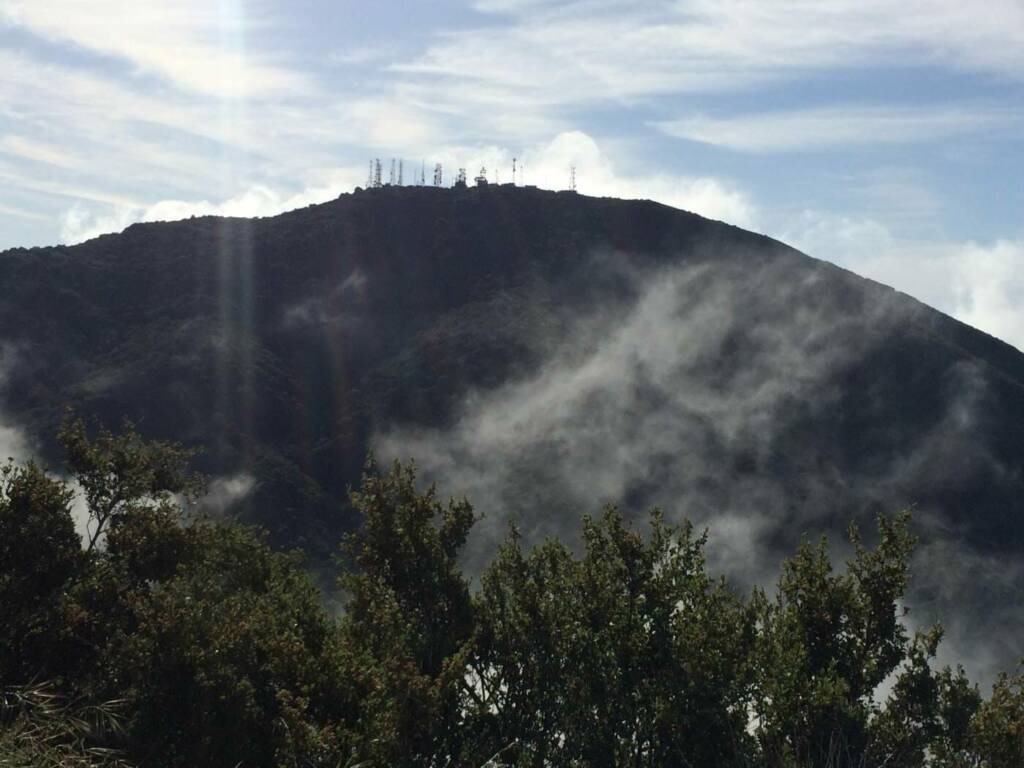 The drive on the freeway was uneventful as we reached the Newport (55) Freeway and headed south to Chapman Avenue where we exited the freeway.  We stopped at the local Shell gas station to fill up with gasoline and then at the local liquor store to get some cold drinks to take with us to the site.  We also stopped at the local drive through (which some people refer to as the local choke & puke) to get some breakfast.  We were now on the way to the mountain peak as we headed east on Chapman Avenue and met up with Santiago Canyon Road.  After many miles, we arrived at Silverado Canyon Road where we continued until the road ended at the US Forest Service gate.  We opened the gate which can be quite a chore due to the massive locking mechanism that allows for many padlocks to open the gate with our key, drove through the gate and locked it behind us as required by the Forest Service.  (At times, we have to get down on our knees or lay on our back to get the gate open which is very undesirable when it is wet from rain but on this day, the gate mechanism was working properly and we did not have to open the gate the more difficult way.)  We now proceeded to drive up the dirt road to the site on the road that presents many unique challenges.  We started by crossing the stream bed which was full of rocks that tend to eat tires.  We continued up the road which had the usual assortment of pot holes, moguls, washboards, washouts and rocks in the road.  We crossed the stream bed a total of 8 times before we started climbing the canyon wall towards the radio towers.  As we reached the top of the ridge, there was a burned out car that has failed to make the turn at the switchback and had crashed through the guardrail at the turn and bolted 50 feet down the canyon wall until it was stopped by the intense brush that kept the vehicle from traveling hundreds of feet down the canyon wall to the streambed below.  This was a “new” vehicle from the standpoint that it was not there when we had been to Santiago Peak the previous time, but having vehicles that had gone off the side of the road was not that uncommon.  At times, the US Forest Service would have the gates open to the public who does not always know how to drive properly on these fire roads, nor do they always have the correct type of vehicle or the proper type of tires for traveling these roads.  They drive the road at higher speeds that are appropriate for a two lane paved mountain road and are not prepared for the slippage of the vehicle on the dirt with street tires and the narrow one lane road while not paying close enough attention to the road to realize that a switchback is approaching.

We continued up the hill past the switchback dodging the rocks and the pot holes.  The challenge when driving these roads is to keep your kidneys inside your body and to avoid developing hemorrhoid problems.  The road can shake you to the point where your think that your brain is made from scrambled eggs depending upon the condition of the road at the time.  The road is ever changing and what you experienced today may be very different each day you travel the road while at other times the road is consistently bad each time you drive up the road.  On rare occasion, the road is in good condition allowing one to reach the work site while feeling like you have been riding in a limousine, but this was not one of those times since this ride was like being inside a blender.

Upon reaching the half way mark, there is a wide area where it is easy for vehicles to pass so we stopped for a couple of minutes to stretch the legs and relieve ourselves from the morning coffee before continuing up the hill.  At one point, we had to stop and clear some rocks off the road to prevent damage to the tires and undercarriage.  We continued the drive until we reached the top of the hill and parked next to the tower so that we had the shortest distance to haul the equipment needed to change out the antenna on the tower.  We removed the antenna from the roof of the vehicle, unloaded our tools, ropes and pulleys and proceeded to don our climbing gear.  We tied the antenna onto the end of the rope and tied the other end of the rope to our climbing belt so that we could pull the antenna up the tower when we got to the top. 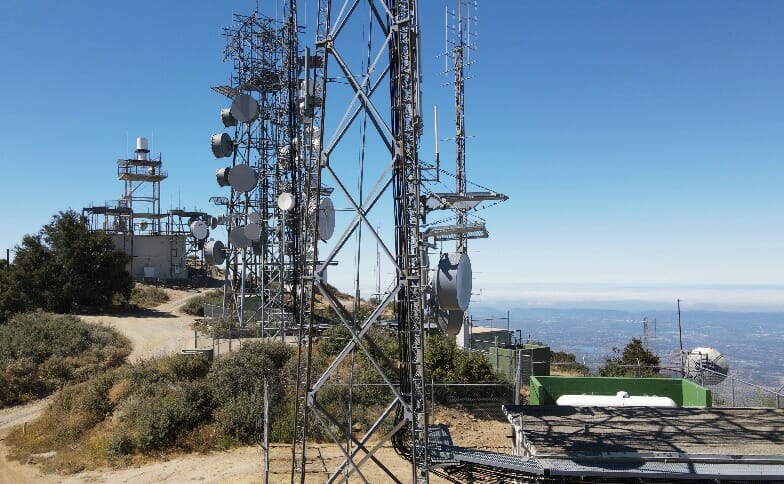 It was now about 7:35AM when we started to climb the 60’ tower.  There was no climbing ladder, so we had to climb up the tower braces until we reached the top of the tower.  At this time, it was long before the new regulations were in place for “high” work which requires that anyone who is working more than 6 feet off the ground must wear a full body harness and fall protection equipment.  We climbed the tower while holding onto the tower with our hands and feet.  We were not attached to the tower with our harness as we were using a typical 1970s telephone company climbing belt which was designed to strap onto the tower once the destination is reached.  So after a brief rest at the top of the tower, we proceeded to climb out onto the cross arm of the tower since the antenna that we had to change was at the far end of the cross arm from the main tower.

When we were about half way out on the cross arm, it was 7:42AM when the Whittier Narrows earthquake struck.  There was a brief jolt at which point I turned to Randy and said to strap in immediately.  Then came the rolling jolts, the shaking and the swaying of the tower.  The earthquake lasted for about 30 seconds, but it might as well have been going for 10 minutes.  We were scared to death that the tower could fall or that the cross arm could fail or that an antenna could break and skewer us.  Thoughts ran through our minds making us think that we might not survive to tell anyone what had happened or that we might not be able to climb down the tower and we would have to be rescued.  We knew not what would happen, but we held on for dear life, hoping that we would have the strength to hold on until the shaking stopped. 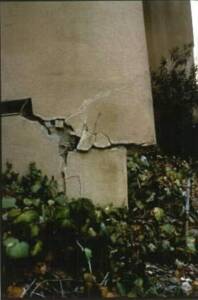 The earthquake was over but our job was not.  We carefully finished moving out to the end of the cross arm where the defective antenna was located.  We still needed to change the antenna.  We cut open the connection and unplugged the antenna.  We loosened the clamps and attached the rope to the old antenna.  We then lowered the antenna to the ground while raising the new antenna to the top of the tower.  After securing the new antenna, we plugged it into the antenna cable, sealed the connection and proceeded to climb down the tower at a slow and deliberate pace staying attached to the tower as much as possible in case there were any after shocks.  When we reached the ground, we were relieved to be off the tower.  We gave thanks to God for protecting us from harm after which we packed up our tools and equipment, then loaded them into the car.  We called into the office to let them know that we were OK and got the report on the earthquake from the office, at least what they knew about the earthquake which was limited at that time.

So we proceeded to drive down the mountain to find that the road had changed since we had driven up the mountain.  Earthquakes tend to dislodge rocks which fall down and find themselves in the middle of the road.  Some of the rocks are small, while others are large enough to block vehicle traffic.  Some of the large rocks were on the side of the road, while others were in the middle of the road.  As we proceeded down the road, it became necessary to clear some of the rocks from the road.  At one point, we had to clear a large rock in the middle of the road that was completely blocking our egress from Santiago Peak.  The rock was of considerable mass and moving it out of the way was challenging.  It took both of us to move the rock a few inches at a time until we had it far enough off to the side to make it possible to pass without damaging the car.  We continued down the road stopping periodically to clear small rocks from the road to make the road more vehicle friendly while keeping the rocks from tearing up the oil pan or taking out the transfer case.  It took twice as long to get down the mountain as it took for us to go up the mountain earlier in the day.

As we proceeded down the mountain, we had to travel down the canyon wall to the bottom of the canyon until we reached the first stream crossing.  We drove across the stream and continued down the road as we crossed the stream bed another 7 times.  There continued to be more rocks in the road than normal, but we finally arrived at the Forest Service gate.  We proceeded to unlock the gate, drive through and re-lock the gate behind us.  We breathed a sigh of relief as we were finally on pavement and were able to drive on a smooth road that was mostly free from rocks.  We proceeded to work our way to the freeway and back to the office by about 2PM.

The Whittier Narrows quake was considered to be moderate had a magnitude of 5.9 or 6.1 (depending upon the data source that you believe is telling the truth) and caused massive damage.  It was the strongest quake since the Sylmar earthquake in 1971 which was a magnitude 6.6 and caused 64 deaths while collapsing or damaging thousands of buildings.  The freeway interchange between Interstate 5 Golden State Freeway and Highway 14 collapsed stranding motorists and wreaking havoc with traffic in the area.  The Whittier earthquake destroyed 123 homes and 1347 apartments while causing significant damage to 513 homes and 2040 apartments.  Three people were killed directly by the earthquake and another five people subsequently died as a result of the quake.  Two hundred people were injured during the quake and there was an estimate of $215M-$350M in damage.