Audio Accessories for Your Portable Radio

MRA has a variety of audio accessories for your needs. Each accessory is popular with different types of use and everyone has their own personal likes and dislikes. Getting the right accessory for the job and your personal preference enhances your experience and satisfaction with the use of the radio.  When carrying a radio on a belt, the speaker is facing away from you and with a lot of ambient noise, it is difficult to hear.  Also, whenever you need to talk, you must pick up the radio from the belt, carry on your conversation and then replace the radio on the belt.  Often times, it is not convenient to do so and it is not uncommon to drop the radio while attempting to reattach the radio to the belt. 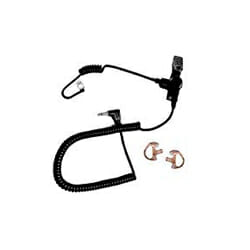 A listen only earpiece allows you to listen to the radio, but does not have any microphone for talking on the radio.  This accessory is useful for those who only have to listen on the radio and never talk or talk very infrequently.  It allows you to mingle with a crowd and still hear the radio while having some privacy, since the crowd cannot hear what is being said on the radio.  It is very small, light weight and comes with a straight cord and a connector that will mate with the radio.  The units that we have in stock utilize the air tube audio interface with either an ear mold ear insert which comes in 3 sizes for either left or right ears or the round button which is universal for all ears. 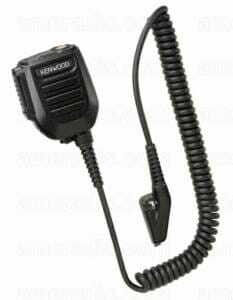 This is the most popular audio accessory, commonly used by police, security personnel, construction, special events, oil production, etc.  The unit has a speaker which allows you to easily hear the radio and a microphone which allows you to talk on the radio built into a small compact package.  The unit typically has a retractable coil cord which is often run up the back and draped over the shoulder and clipped onto the shirt near your head so that you can hear the sound out of the speaker easily.  When it is time to talk, you can turn your head and face the microphone, press the PTT button on the side of the speaker-microphone and make your transmission.

There are many variations of each model which have different options for different situations such as the location of the PTT button, the type of PTT button, a quick disconnect which allows you to quickly detach the radio from the headset, audio gain on receive or transmit controls, noise canceling adjustments, type of ear pad and type of muff.  These are used when you want to keep your arms & hands relatively free to do other things and do not want to be picking up a microphone to talk and you do not want the receive audio sound blaring.  This is very common in studio production.

The single muff covers one ear and allows you to hear normally from the other ear.  This is used during most TV and movie production.  Dual muff is used in higher noise environments when there is not a great need to communicate with people who are not on the radio.  Having a noise canceling microphone makes your transmission more intelligible by keeping the background noise out of the radio transmission, but you have to speak very close to the microphone to be heard at a normal volume level.  Item 9 above is for very high noise environments like being on the tarmac of an airport and needing to keep the high noise from causing hearing damage.

We carry the lightweight single muff headset in stock as well as the heavyweight dual muff with noise canceling microphone in our rental fleet.

Are used in a similar fashion to the lightweight single muff over-the-headset.  The behind-the-headset is less noticeable than over-the-headset because the band goes behind the head & is often hidden by the hair.  It does not interfere with fancy hair fashions that are commonly worn by women.

The following kits are also known as lapel microphone kits.  The number of wires in the kit refers to the number of cables that emanate from the plug that connects to the radio.  All of the kits are similar in nature and are available with the air tube earpiece, D ring earpieces and several other earpiece options.  The air tube is the most commonly used earpiece.

The cable goes from the radio to the microphone which will have a PTT switch integrated into the body of the microphone.  The earpiece is also connected to the microphone and often has a coiled cord to keep from having too long of a cable dangling around the body.  It has the simplest and cleanest wiring for use.

The device is similar to the two wire kit except that the PTT switch is completely separate from the microphone and has its own cable from the radio to the PTT switch.  This allows separate paths for all 3 elements of the kit for routing the wires.  This makes this version of the kit more versatile, but has more wires to get tangled or caught on objects as you walk nearby.

Each of the different lapel microphone kits have a variety of earpieces.  They are as follows:

Which looks like a button mushroom.  It is inserted into the ear canal and  it blocks sound from outside sources and allows you to hear the radio solely through the one ear.  Some versions of the ear tip have a double flap to seal even more effectively than the standard ear tip.  Also, there is a noise attenuating ear tip that attenuates outside noise even further.  It is made of a foam rubber compound which is flexible and squeezable.  When it is inserted into the ear, it compresses a bit to stay in the ear, so it applies pressure to the ear.  If you are not accustomed to having an ear plug in your ear, you will experience some discomfort from the ear plug until you build up a tolerance for having it in your ear.

Which is similar to the button mushroom, except it tends to fit into some of the grooves of the outer ear and not block the entire ear canal from outside sound.  This is similar to the ear buds that you use with a cell phone or on an airplane.

Is a earpiece that fits into the natural grooves of the outer ear and “snaps” into the grooves.  It applies a small amount of pressure to the ear, so it tends to be more comfortable than the button mushroom and takes less to become accustomed to having it in your ear.  Although you will hear the radio clearly and easily with the ear mold, it does not close off the ear to hear anything else besides the radio so you can hear almost normally through the ear with the ear mold.

Is a sound transducer that hangs over the upper part of the ear and sits outside the ear.  It allows one to hear the radio well, but does not have the hygienic issues of a ear mold or button mushroom which is inserted into the outer portion of the ear canal.

The Swivel, The C Hook and The Ear Hook

Are all sound transducers that sit in the groove between the head and the top of the ear and have a transducer that rests on the outside of the ear, directly in front of the ear canal.  Each one has a slightly different configuration as to how it is held onto the ear and since it is not inserted into the ear, is more hygienic when used by multiple personnel.