Base Station Installation in a Trailer

The base station installation was not too difficult, but since it was not a good coverage area for one of their repeaters at Mt. Lukens, I needed to get the base station antenna out in the clear to reach the repeater.  The other repeater at Oat Mountain was easily reachable.

I started the installation by mounting a mast to the side of the mobile home and secured it properly to the side of the home.  I then mounted the antenna and ran the cable inside.  The customer indicated the location where the base station radio was to be located, so I ran the cable underneath the home and came up through the floor inside the cabinet to keep the cable from being visible until it came up through the cabinet to connect to the base station.  The installation looked great, so now it was time to attach the antenna to the radio, plug in the base station and test the system.  That is when the sparks started to fly – literally.

I found the owner who was working on some equipment outside the mobile home.  I needed to find out if there have been any unusual situations with the electrical in the trailer.  He indicated that everything seems to operate normally, but his wife was complaining about feeling like she was receiving a mild electrical shock when she was in the bathtub.  I got the electrical outlet tester and plugged it into the outlet.  The tester indicates that there was something wrong, but I could not put my finger on the actual problem yet.  I went to the power panel with the circuit breakers to see if everything looked OK and take some measurements with my voltmeter.  I checked to see if the wires were securely attached by having the set screws tight.  The voltmeter indicated that the voltages were correct and that the wires were attached to the correct terminals.  Nothing seemed wrong on the face in the power panel, but I was not convinced. 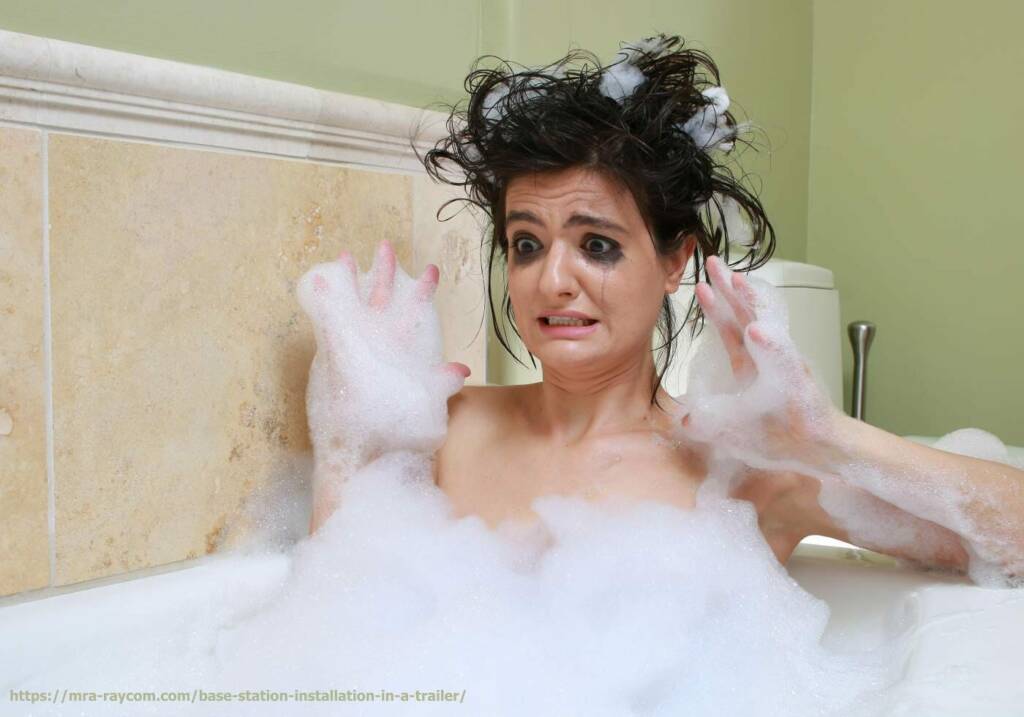 I traced the wires from the power panel which went into a conduit under the trailer and traveled along the length of the home to the far end of the home where the power entered the home from So. California Edison, the power company in this part of the country.  The wires from Edison seemed to be attached to the correct wire in the trailer which did not explain the problem I experienced with the antenna when it sparked while attaching to the base station.  I decided to pull the wires out of the junction box under the home to examine further.

When I pulled out the wire from the junction box, I examined each wire and how they were attached together.  The neutral wire from Edison is bare since it is supposed to be grounded at the power panel.  The two hot wires are insulated.  I looked at the first hot wire and it was securely attached to the respective hot wire in the junction box with a split bolt which was wrapped in insulating tape.  When I checked the 2nd hot wire from Edison, it too was securely attached to the respective wire in the junction box, but I noticed that the tape insulation on the split bolt had been rubbed through and there was a bare spot.  I went inside and checked the outlet and now it was showing normal with the outlet tester and the antenna connector on the base station no longer was generating sparks when attaching and removing the antenna connector. I went back outside and placed the wire back in the box in the same position in which I found them, then went back inside and now the antenna connector was sparking again and the outlet tester was reading funny again.  This proved that I found the problem.

The wires that fed power into the trailer are large, very stiff and difficult to form into the box.  The pressure of the wires against the side of the box caused the hot wire to rub through the insulation and cause a partial short between hot and ground.  This caused the ground in the trailer to be partially hot which was not properly protected by the grounding of the ground rod which was not driven into good soil. Also, not all of the metal in the manufactured home was securely bonded to each other causing voltage potentials between different portions of the home. I took the wires out of the box, taped the split bolt splicing the wires together, bent the wires into a tighter circle to relieve the pressure of the junction against the side of the box and closed up the box.  I then closed up the power panel, checked the outlet again and checked the antenna connection again.  All was well with the electrical system in the home.

I spoke to the owner and told him what I found.  I told him that he should consider himself lucky that his wife had not been killed by electrocution while taking a bath.  The electrical system was now repaired and they should not worry about having any more trouble with their power in the trailer.

I just went there to install a base station……………….