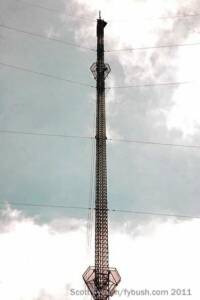 Antenna size does matter, but not the way people think. It is generally believed that a larger antenna or one with more metal is better and it would seem to be logical. More capture area means more signal, right? Not necessarily, antenna size is related to wavelenth. You might be wondering “what the heck is that?” or “how can a radio wave have a length”. A radio wave is an Alternating Current, that is it changes polarity from + to – and back again. It also is traveling at the speed of light, so like the ripples on a pond, it is not the same along it’s entire length.

The wave length is related to the frequency. Higher the frequency, the more waves are in a given space, and so they are closer together or shorter.

The antenna is most affected by frequencies that are related to their wavelength.

In the beginning of radio, frequencies were much lower than they are today. It was more difficult to build higher frequency radios, and the higher bands were often unexplored territory, so nobody was sure what was going to happen as the frequency increased. In the US, the AM broadcast band is a legacy of the time with a frequency of .54 to 1.6 MHz. A 1/4 wave antenna at these frequencies will be 433 to 146 feet long. The the broadcast stations would set up very long antennas to broadcast to operate as efficiently as they could, for most home listeners antennas of this length were not practical since the entire tower that you see at the radio station is the antenna. “Shortwave” bands used for broadcast in other parts of the world were also long (101 to 24 feet for a 1/4 wavelength) by today’s standards. So antennas were shortened by various means, and lost efficiency in the process. These short antennas worked, but not as well as a full size antenna. So with those radios, it was often true that if you could find a way to string more wire, you could improve your reception since you were getting closer to the length that the antenna should have been. Even with CB, the 1/4 wavelength is about 8.5 feet. Most cars don’t have an antenna that size, and the owners don’t want one because it catches on things overhead. However antennas that are closer to the correct length are observed to perform better than those that are too short.

By comparison, the FM broadcast band today is 88 to 108 MHz. So that is 31 to 26 inches for the 1/4 wavelength. This is much easier to build an antenna for. Television would be 51 to 4 inches. There was still the desire to have indoor and portable antennas, which gave rise to the classic “Rabbit Ears” on top of the set. This is really a very basic antenna, like the dipole antennas pictured above. Some realistic things can be done to make it perform better such as pointing it towards the signal, or even collapsing the telescoping elements down to the 1/4 wavelength of the channel you are trying to receive, but it became a game of trying to adjust the antenna for the best picture, and the frustration of watching the signal change as you walked back to your chair. Of course making the antenna shorter seemed counter intuitive to most people, so the elements were fully extended, and soon there was aluminum foil wrapped around the antenna, and after that a wire leading from the antenna to the curtain rod. Bigger must be better. The reality is that randomly hanging metal on an antenna can have unexpected results. The signal collected can, and likely will be out of phase with the signal from other portions of the antenna. This can cause the signal to be canceled out rather than increased. Many antenna designed are also directional, both to collect more signal, and to limit interference coming from other directions. Random bits of metal will change the pattern of the antenna sacrificing that directionality.

It is possible to redesign antennas to collect more signal. Combining multiple antennas in phase would be one. A reflector is another, but there is some calculation that determines the size of the reflector, and the distance from the driven element of the antenna. It is also possible to expand the usable frequency of an antenna with elements of differing lengths. This is common in television antennas because of the wide range of frequencies used. The longer elements are for the lower frequencies, and the shorter elements are for the higher frequencies. This antenna is also directional, picking up more from the front end that it does the rear or sides.

None of this is an accident, nor is it done by randomly hanging bits of metal. The frequency resonance, and the distance the wave travels in relation to the other elements are all taken in to account. So size does matter, but not in the way most people think. An antenna is selected for the frequency in use, and the purpose. The radios in your cell phone, WiFi access point or most “walkie talkies” are fairly high (UHF or higher) so small antennas work well. For VHF and below, a longer antenna is better.