It was a typical hot summer day in Orlando, Florida when we were working on the installation of a new 10 channel trunked radio system on the Bithlo Tower.  In an area of the country like Florida where the land is flat, towers and tall buildings are required to get reliable radio communications since they do not have tall mountains to get the antenna height.  The Bithlo Tower is located in the small town of Bithlo, approximately 20 miles east of Orlando.  The tower is 1600’ tall which was built to house TV transmitters and broadcast radio transmitters which are located in the building at the base of the tower.  All the two-way radio and microwave systems utilizing the tower are actually housed on platforms which are located at 500’, 1000’ and 1400’ above ground.  The platforms are open extruded grids with railing around the platform.  The tower has an elevator which starts approximately 60’ above ground and takes about 20 minutes to climb the 1400’ to the platform where we were going to install the equipment.  The two man elevator has room to place tools and equipment on the floor of the elevator if you stand on top of the equipment. 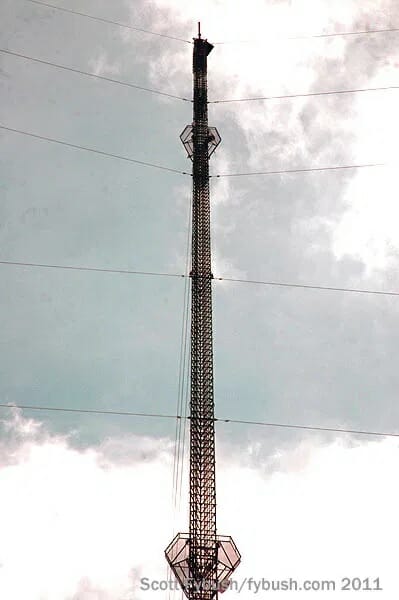 Before showing up at the tower site, we needed to build the system.  The local radio shop was used as our home base to build the radio system into the cabinet.  We had a picture of the container that was going to be hoisted onto the tower and we had to figure out how to get the equipment into the box without anything hanging outside.  This was done back at our office and then the equipment was shipped to the two-way shop in Florida where we had to assemble the equipment into the box and get it ready to be installed onto the 1400’ level of the Bithlo Tower.  Two days were spent at the two-way radio shop assembling the pieces into the box and testing out the system to make certain that we were installing a working system and not wasting our time installing a worthless box of junk.  After two long days of work, the box of equipment was ready to be installed on the tower.

Three days later, we were standing at the base of the Bithlo Tower with two technicians from the two-way radio shop and a tower crew that was hired to install the box on the 1400’ platform.  The FCC license for the system had a requirement to be on the air by the end of the day, so it was our job to be certain that the system was fully operational before midnight that night.  We were at the tower after a 2 hour drive by 8AM at which time the tower crew started rigging the tower to lift the package with a winch over the side of the tower because there was no way that it would fit in the elevator.  We watched as the tower crew worked their magic and designed a method of lifting the 1000 pounds of equipment 1400’ up the tower without damaging the box and everything inside.  While they were working, we gathered the antennas, antenna cable, connectors, power wire, telephone cable, water tight flex and all the other materials that we needed to complete the installation.

The tower crew climbed the outside of the tower to get the lifting cable up the tower since they could not use the elevator with the cable.  Climbing 1400’ is not an insignificant task and the man who was able to do it was in phenomenal physical shape.  He climbed the tower in 2 hours while others in the crew were working out the rigging of the pulley system to lift the load.  By 12PM, they were ready to start lifting the box onto the platform.  It was totally amazing to see this electronic work of art being lifted up the tower.  I managed to get sunburned (wearing sunblock) while watching in amazement how this almost impossible task was being accomplished.  When the box was about 800’ up in the air, there was a giant pause as the rigging at the 1450’ level gave way and collapsed, allowing the box to drop about 5’ in an instant.  All we could see from the ground was the box shaking wildly and we did not know why.  It wasn’t until we spoke to the tower crew that we were able to understand what just happened.

The lifting continued until the box was above the platform because we had to clear the railing that surrounds the platform.  The equipment was then lowered onto the platform in the space that we were allotted for our equipment.  It was now 4PM in the afternoon when we were handed the equipment by the tower crew at which time we went full speed hooking up the equipment to get it on the air.

Due to the large distance involved in traveling up the tower, the power connections are sent up the tower as high voltage and at each platform, there was a power transformer to convert the power to 120/240V and a power panel with circuit breakers.  Telephone wires also traveled up the tower from the bottom to each platform.  The connections for both power and telephone were underneath the platform and had to be made with watertight flex.  Our installer had to make the connections under the platform to the wires that exited the flex into our cabinet while we had to make the connections in the cabinet.  The antennas were mounted to the railing around the platform and we had to run the antenna cables to the bulkhead connectors that protruded from the side of the cabinet.  One receive and 10 transmit antennas were installed on the platform along with 11 cables and 22 connectors.  As we worked diligently on the connections, we had to power up the equipment and verify that it was still operational.  That required a lot of test equipment and tools.  Since the platform was made from extruded metal, we had brought a quilted furniture pad to lie under the tool box to keep our tools from falling through the grate.  Anything that falls from the platform is a lethal projectile and will never be found again, so it is imperative that one take considerable caution to prevent dropping anything, even something as small as a washer.

We worked into the night, diligently pursuing the ultimate goal of getting the system on the air before midnight.  We focused on getting the power connections first, then mounting the antennas and finally making the antenna connections.  We completed enough of the work to test the system by 11:45PM at which time we gave a sigh of relief that we met the deadline.  We continued the work attaching ground wires, sealing connections with heat shrinkable tubing, tying down cables, attaching the flex for the telephone connections, pulling the telephone wires, making the telephone connections, attaching the modem to control the system and performing all the final hookups and check to verify that everything was working.

It was 3:20AM when we left the parking lot and started our trek back to Tampa where we were staying.  We arrived at the hotel by 5AM at which time we decided it was time to go to bed.  We slept in until 10AM, got up, got dressed and showed up at the two-way shop for another day’s work to get the rest of the sites on the air in the system.