It was a cold day in December on the 19th of the month when we were able to return to The Westin Monaché to make the network connection for the site so that communications from this site would connect to the rest of the Diga-Talk Network which would make the site perform as it should be able to perform.

The day started early with the guys heading out to install equipment at Flash II, another tower site that we wanted to add to the network at a time that we call O’dark:30.  Flash II is located about 30 minutes north of the town of Barstow, a small city on the road from the Los Angeles basin to Las Vegas.  Barstow is about one half of the way to Las Vegas, so the trip to the site is about 3 hours of driving.  They left their homes around 5AM to be able to beat the Los Angeles traffic and be onto Interstate 15 in the high desert (Victorville area) before 6AM.  They kept going north, heading towards the site so that they could get an early start working on the tower.  They arrived before 8AM and immediately went to work installing the new site for the network.  We had an advantage at this site because we already had a network connection. 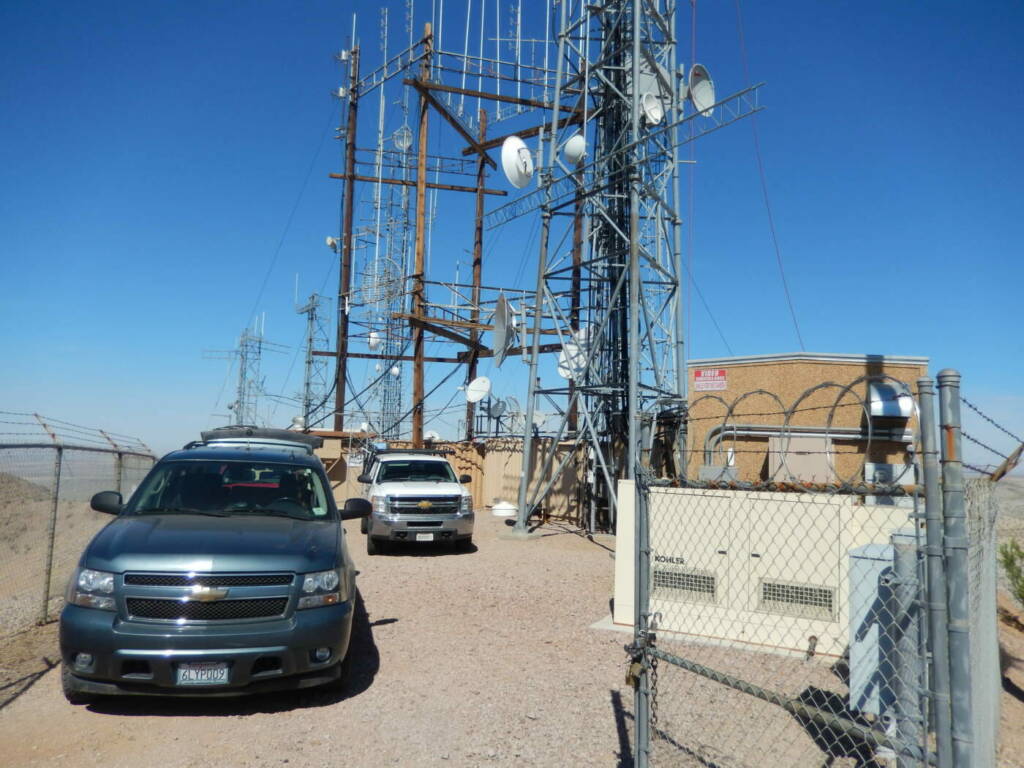 We were using the site as a microwave relay to connect our site at Rodman Mtn to our network at Quartzite Mtn.  The path was too long for shooting directly from Quartzite to Rodman and there was not a good line-of-sight path due to other mountains in the area that interfere with the line-of-sight path.  Therefore, we already had a rack installed at the site with our microwave equipment in the building and on the tower, so we were prepared to install the balance of the equipment to provide the mobile coverage. 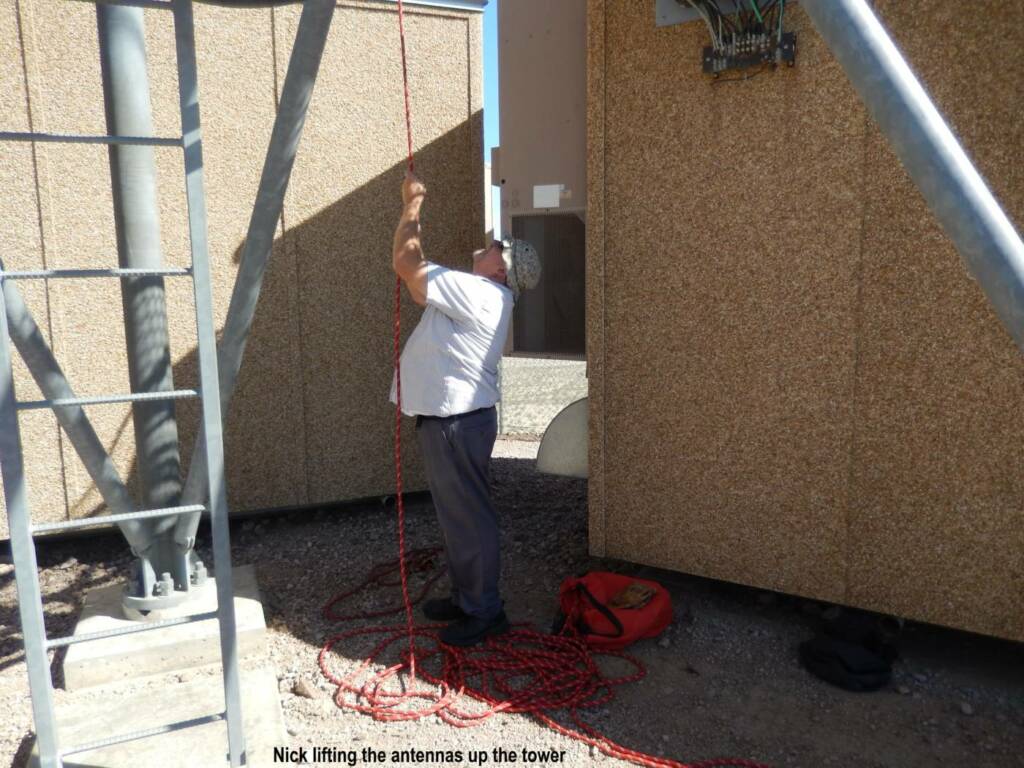 The first thing to do was to install the equipment in the rack because it was cold outside and climbing the tower would be easier once the temperature rose a bit more as the morning proceeded.  They mounted the equipment in the rack and got the site fully wired less the antennas.  They then started working on the network connection to get the site connected to the network.

It took a while to clean up the site, load up the vehicles

and lock up what was necessary such as the building and the gates.  The guys all headed back to Barstow where they proceeded to have some lunch.  It was after lunch and now about 2PM so Nick and Juan headed back towards Los Angeles while David and Chris headed west on Highway 58 from Barstow to Kramer Junction to reach US395 where they could turn right to head north towards Mammoth.  I was already in the Eastern Sierras and heading towards the town of Bishop where I had to meet with our internet provider to pick up the dish antenna and radio to connect to the wireless internet service provider (WISP) so that we could obtain our internet connection to connect The Westin site to the Diga-Talk Network.

I was at the WISP office loading the microwave equipment into my vehicle when David called to tell me that he was having trouble with his vehicle.  After turning north on US395 at Kramer Junction, his transmission started slipping.  This was a serious situation especially since he had several hundred miles of travel ahead of him.  He was concerned about traveling two lane roads through the middle of nowhere risking a breakdown at any moment.  Having never traveled the road on a previous occasion, he felt that the road would be windy and twisty, so he was concerned that his transmission would give up the ghost while heading to Mammoth.  He considered turning back and heading to Los Angeles, but that would have left the job undone and we were not sure when we would be able to come back to make the connection.  He stopped to check the transmission fluid, topped it off and decided to continue forward to Mammoth and hope for the best.  Without further fanfare, he headed north on US395 driving while trying to drive at a constant lower speed to minimize the work of the transmission.  He continued to watch the transmission temperature and monitor the performance of the transmission while switching gears.

David and Chris arrived in Mammoth early in the evening after dark, but it was far too late to attempt to install the dish this evening.  We had just passed the winter solstice which meant that it was dark by 5PM.  Doing antenna work takes time and we did not want to be attempting it in the dark.  In addition, the temperature drops considerably in Mammoth after sundown which adds to the difficulty in performing an antenna installation.  It was a better idea to have a good dinner, relax, get a good night’s sleep, and wait until the next morning.  It is far easier and safer to work in the daylight and it is a lot warmer than at night.  However, this time of year, it was in the high 30s during the day, which is cold for working on antenna systems, especially if there is a breeze.

We got up early the next morning and quickly got ready to leave the house.  We proceeded to head over to the New York Deli to have a good breakfast to start the day.  The Westin is the tallest building in Mammoth and sits on top of a small hill which provides the hotel with a great view and a good location for radio signal propagation.  After breakfast, we got into our vehicles and took the long drive (about 1 minute) over to The Westin and parked in the underground garage and found decent parking spaces where we had room to open the car doors without danger of damaging the adjacent vehicle.

We were there on Thursday, December 20th which was the last day before everything goes crazy in Mammoth, so we were able to find a good parking space but not as good as our previous trip to the hotel.  The next day was the start of Christmas vacation and the occupancy in the town approached 100% making the hotel crazy busy, so we needed to complete the job that day otherwise we may not have another opportunity until after winter was over.  We gathered the microwave dish antenna, brackets, pipe, cable, cable ties, sealant and connectors and made our way to the lobby to chase down the building engineer to get access to the roof.  We located him and went up to the 8th floor where we proceeded to lay out the tools and materials for getting the job done.

David and Chris started working on running the cable through the attic area where they were protected from the weather.  It was before 8AM and the temperature was still trying to heat up from the cold night.  With the small breeze on top of the hotel, it was not very pleasant on

the roof.  We figured that it would take 1-2 hours to get the cable run from the equipment to the roof giving it time to warm up to a more pleasant temperature for installing the antenna.  Chris had to climb through the attic again experiencing the difficulty of maneuvering inside the attic area being cut by the sharp edges of the metal lumber along with the discomfort of having fiberglass insulation being shoved into every orifice and pore in the skin by

crawling around in the attic.  After completing the cable run, David and Chris went up onto the roof to start mounting the dish.  They tried to mount the dish down low, but it would have interfered with the antennas from one of the cell sites in the building, so we decided to mount the dish to our existing antenna mast.  This meant that we had to install the appropriate clamps and pile to create an offset mount for the dish and then mount the dish to the offset mount.  While that was happening, I was performing some checks on the existing equipment, installing lightning arrestors and making contact with various personnel to make earn some brownie points for being a good neighbor.

David and Chris now had to get the dish aligned to get the best signal from the source which was near the Mammoth Airport.  They looked at the display on the radio that indicated signal strength and kept moving the dish in tiny increments until the best quality signal was locked in.  This allows for the highest possible data speed and the ability of the antenna to keep performing when the weather is rough and the antenna is caked in ice.

We finished by 1PM and managed to clean up our mess.  Building engineers do not like to clean up after tenants and there is no maid service in the utility areas of the hotel.  So we left the area as clean or cleaner than we found it and made certain that we did not leave anything behind.  We lugged everything to the elevator and took it down to the lower lobby level where we had parked and then took it back the short distance from the elevators to the vehicles.  We loaded up and left to head home.  We stopped at the famous Mahogany Smoked Meats when we reached Bishop 40 minutes later to have a sandwich, get some beef jerky for the road and then headed south for the winter.

It was another good day for the Diga-Talk Network.