Recently, we were called to resolve issues with a large RF cable distribution DAS system that was installed in a new hotel under construction by another company.  (Another radio company besides Raycom was called to help with the system before we were contacted for assistance.  They spent two weeks with several men working on the system and did not get it to work properly.) The system was highly complex due to the AHJ (Authority Having Jurisdiction) requiring a 3 band system with VHF, UHF T-band channel 14 and UHF T-Band channel 16.  The VHF unit was manufactured by Fiplex and it was a class A two channel system with a very low +7dbm output power, complicating the distribution design and making the system operate at near 100% capacity, leaving little room for anything being done incorrectly.  The UHF section was a high output +27dbm unit manufactured by Comba.  Both units were combined into a single cable distribution system. 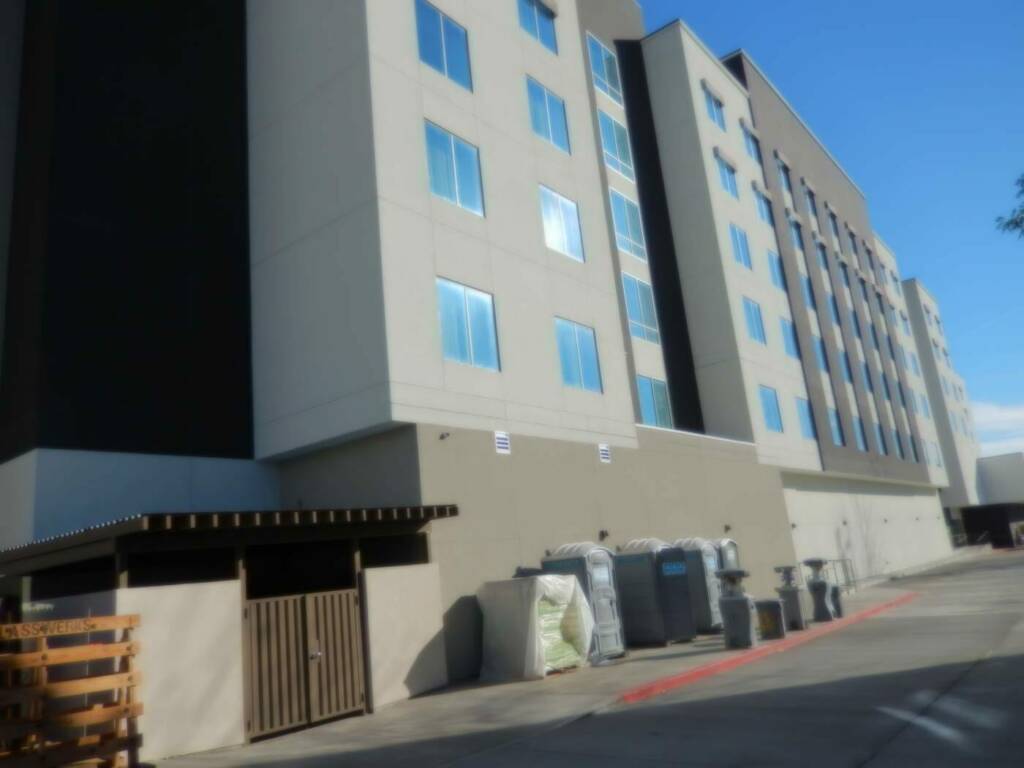 Each BDA unit was fed by a yagi antenna on the roof of the building utilizing a separate feed line to each antenna.  The UHF antenna was pointed at El Mirador, the donor site for the ICS System which was at an azimuth of 336 degrees.  The VHF antenna was pointed at Sequoia Park donor site at an azimuth of 204 degrees and the Bradshawe donor site at 177 degrees.  Both antennas were located at the northwest corner of the building utilizing a non-penetrating mount held down by 8 concrete blocks.

The system had been installed and was inspected several times, failing inspection each time for performance issues of which there were many.  The VHF system was suffering from coverage issues and degradation from many sources including lack of isolation between the donor and service antennas resulting in the need to reduce gain.  The UHF section lacked coverage within the building, in spite of the fact that there were a large number of antennas on each floor.

Most people do not understand the concept of a DAS system.  The concept is simple, but the implementation can be difficult.  It requires a thorough understanding of RF principals and a rigorous adherence to quality with the installation. 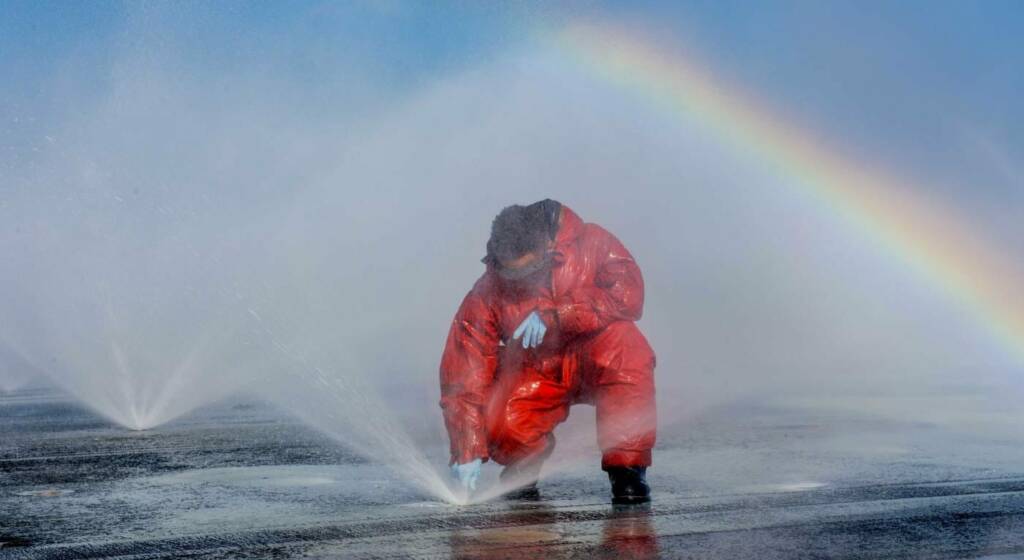 I like to use the analogy of a plumbing system to describe how the system works because most people understand the basics of plumbing.  Each antenna in the DAS is like a shower head (or some people prefer to think of it as a sprinkler head in a lawn watering system) that sprays a fine mist of radio signals in all directions.  The goal is to cover the entire building with the fine mist of radio signals, so regulating how much signal sprays out of each antenna, whether a directional head is used to spray into certain areas or an omni directional antenna is used to spray signal in all directions from the antenna, the location of each antenna to cover the area including high traffic areas such as elevator lobbies and determining how many antennas are needed to spray the radio mist everywhere.  Although radio signals will penetrate walls, different materials offer a differing amount of resistance to the radio signal passing through the wall.  Each and every physical object within the building offers some resistance to the radio signal, so having an understanding of how each obstruction affects the radio signal is essential to being able to predict the outcome of any design.

The antenna cable that connects all the antennas is like the pipes that bring the water to the shower heads.  Signal taps determine how much signal is fed to each antenna by determining how much signal is siphoned from the main pipe to spray through the antenna.  If the connectors are loose on the cable, it is like having water leak out of the pipes at the junctions.  A spray of the radio signal out of the cable at a loose connection will cause a hot spot where the spray is concentrated.  This robs the water pressure down the line so subsequent antennas down the line have low pressure, so the spray of radio signals will be below the strength that would otherwise be predicted.  Besides leaking signal, poor connections inject signal loss into the cable distribution system which is equivalent to having an obstruction in the water pipe that kills your water pressure so that there is insufficient signal to spray out of the antennas down the line.

Problems Found in the System

Numerous problems were found with the system such as:

When we arrived at the project, it became necessary to review the system design and determine if the basic design was flawed or if the installation was defective.  Since we had not been involved with the design or installation, we did not know what standards were used to implement the DAS system, therefore, we had to check everything.  We started by measuring signal levels, investigating interference from nearby signals, checking for bad connections, testing antennas and testing the amplifier units.  Here are some of the tasks that we performed:

Each signal tap has 3 connections. The signal is fed into the input of the signal tap.  If the cable connector is not properly secured to the signal tap, signal will leak out of the loose connection.  The signal tap must siphon the correct amount of signal from the main line (input on the left and output on the right) to send to the antenna via the tap port which is the port that is in the middle facing up.

The tap value determines the amount of signal that is siphoned from the main line and sent to the tap connection.  See Figure 3 to see a signal tap.  The connection cable that is attached to the tap port must be properly secured to the tap and connected to the antenna.  We found some of these cables cross threaded, so they did not make proper contact, so the cable did not properly connect the antenna to the signal tap.

Many antennas were added on the B1 and B2 levels of the building to fill in areas that had insufficient signal.  Some of these antennas were moved to provide a better line-of-sight view from the antenna to important area of the building such as the elevator lobby.  Tap values were calculated to determine how much signal to feed to these antennas.  When adding an antenna, we attempted to make the aesthetics of the antenna be pleasing per Figure 5 and Figure 6.  Compare those figures to Figure 7 and Figure 8 which depict antennas and cables that were sloppy with the installation.

It appears that different portions of the job were installed by people with different ideas of what is considered to be an acceptable installation.  In Figure 9, you can see a cable that is properly secured every 2 feet, the cable is pulled tight, has very few bends, is tight to the ceiling and looks professional.  Compare that to the cable in Figure 7 which is sloppy, sagging, bent and looks like the installer was in a big hurry to finish and go home for the weekend to attend a big party.

One of the antennas on the lobby level was installed on the restaurant ceiling near the north end of the building.  See Figure 10.  The antenna performed poorly because it was mounted on the drywall ceiling under a metal support above the drywall.  Most antennas including this model antenna do not like being mounted near metal any better than being mounted to the concrete ceiling.  If we moved the antenna, there would be a hole in the ceiling that would need to be patched and repainted.

We were able to reduce the collateral damage by leaving that antenna in place disconnected from the system and installing a new antenna above the drywall to radiate the signal.

On level B1, several antennas were added or moved.  In addition, we changed the values of the taps on the floor to redistribute the signal.  The signal comes down from the first floor to B1 near the north end of the building and the signal travels south through the cable to the south end of the building.  After we fixed numerous connections (See Figure 13 as an example of the one connector on the right that we had to replace because the existing connector was broken and the connector on the left was installed improperly causing the connector to be loose on the cable) along the line, there was great signal at the south end of the building, but the signal was weak at the north end which was the source of the signal.  (This is reverse from the normal situation where you have strong signal at the source and weak signal at the end of the line which is a long distance from the source.  This is due to the signal loss in every foot of cable that reduces the signal level at the far end of the cable and the fact that the signal taps siphon off signal to antennas along the line.)  After investigating, it was determined that the tap values were incorrect as the taps were not siphoning off enough radio signal for the antennas at the north end of the building through the center of the building.  We had to install new taps with the correct values to make the cable system perform correctly.  We also added 2 additional antennas to fill in signal in areas that did not have sufficient signal from other antennas.

The VHF BDA had several issues.  Alarms were triggering under certain signal conditions which would cause the system to fail.  Additionally, the output level of the BDA was below the rated value by at least 10db which was unacceptable.  We had several conference calls with the factory engineers to get the BDA to perform properly and meet specifications.  The calibration of the BDA did not match the levels that we saw with our test equipment, so the factory had to make adjustments with their proprietary software to calibrate the unit properly.

The process of investigating and repairing the DAS system involved several people, multiple trips to the property, ordering parts, waiting for delivery, perseverance, blood, sweat and a lot of hard work.  It was necessary to keep digging to find the problems because most of the issues were hiding inside connections that were not necessary visible to the trained eye.  Some of the bad connections were visible if you knew what you were looking to see, but many of the connections were located in places where it was difficult to access and the lighting was poor which made it difficult to investigate.  This emphasizes the principle about the need to do the job right the first time, because it is too expensive to do it right the 2nd, 3rd or 4th time.  We had almost 200 hours work to repair the system so that it would pass inspection.  Additional work could still be done on the system to clean up the wiring that was not up to the quality of other portions of the system.