Driving Down Mt Lukens in a Lightning Storm

Many years ago, I was at Mt Lukens performing maintenance during inclement weather.  The storm was approaching, but not at the mountain when I started heading up the hill, but poor weather was predicted for the day.  I had to work on one of the trunked channels in our system to fix the problem that was plaguing our customers.  It took about 35 minutes to drive up the mountain at which time I arrived at the building. 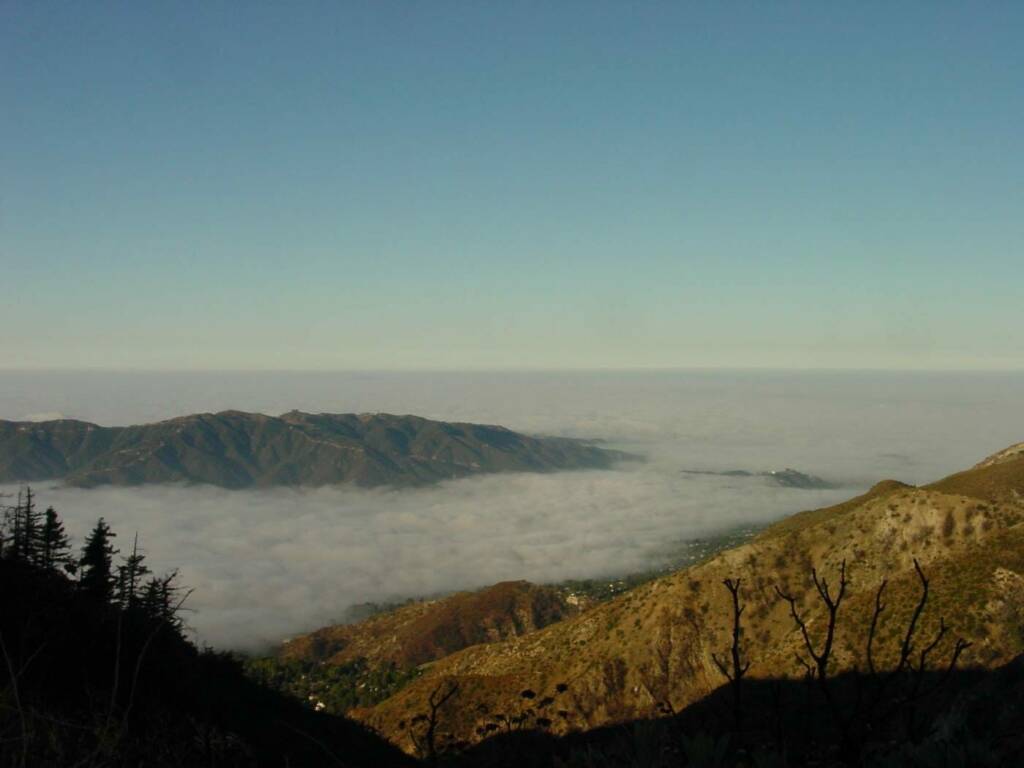 I went inside the building to look at the failed channel.  It became apparent that the problem was with the power amplifier.  Fortunately, I brought a spare power amplifier with me to swap out for the failed amplifier.  It took about 15 minutes to swap the amplifier and be certain that the new one was operating properly.  I put the failed amplifier into the car, turned off the speakers on the repeaters, turned off the lights, set the alarm and locked up the building.  I then returned to the car where I called in on the radio to let everyone know that I was leaving the mountaintop and heading down.

What was apparent to me was how much worse the visibility had become.  When I headed up the mountain, visibility was not an issue.  When I arrived at the site, visibility was a minor problem, but now the mountaintop was fully engulfed in a fog.  I turned on the headlights and found that the lights were considerably reflecting off the fog and I could only see about 10 feet past the end of the hood of the car.  I carefully backed up from the building and then pulled forward.  With the thick fog, it was difficult to see where the road was located and where were the limits of the roadbed.  I had a difficult time maneuvering from the wide open area to find the road that leaves the site.  It had turned completely dark, almost pitch black with the exception of my headlights.  As I maneuvered around the top of the mountain, I almost ran the car into the brush while attempting to find the road that exits the area.  Suddenly, the road appeared and I turned right to follow the road around the north side of the site.  Moving at about 2 miles per hour due to the lack of visibility, I finally managed to pass the last building and now started heading down the mountain.  After several minutes, I started hearing thunder, but I could not see the lightning due to the fog.  I knew that I needed to get off the mountain because lightning is known to hit cars at times that are up on the mountaintop, but the visibility would not allow me to move faster.  The wrong move could plunge me over the side of the road and fall 2000 feet to the bottom in a very short time, so I did not dare to move faster.

As I continued down the road, the thunder became louder and more frequent.  I was able to see the fog light up with the lightning flashes which made me concerned that the lightning was now much closer than before.  I wondered if the clouds continued all the way down the hill or if the clouds would end as I continued to drop in altitude.  A minute later, I heard a incredibly loud crack and the entire surrounding of the car lit up with a bright white light.  The lightning was very close as the sound was virtually simultaneous with the lightning.  I could not see the lightning bolt, but the thunder was deafening and when it struck, everything was a bright white that was being diffused and distributed by the fog.

There was nothing I could do except continue to drive down the mountain.  Sitting still would not minimize my chances of being hit by lightning and it would keep me from getting down to the city, so I kept going and going and going.  After about 40 minutes of crawling at about 2-3 miles per hour, I broke out of the fog so I could see the road.  I increased my speed to 10-20 miles per hour which is the normal speed for traveling the road.  I had traveled less than 8 minutes from the site if I had been going at a normal speed, so it was another 25+ minutes before I reached the gate at the bottom of the road.  I opened the gate with my key, drove through the gate, locked the gate and proceeded to drive out of the US Forest Service station to Angeles Crest Highway.  I turned right to head down the mountain which is about a 7 minute drive to the freeway.

I called on the two-way radio to let everyone know that I was down from the mountaintop and back on the freeway.  I headed back to the office to drop off the amplifier for repair and to take care of some items at the office.  It was very satisfying to be back at the office and not be sitting up on the mountain in distress.  I sighed a sigh of relief………………………