It was a beautiful spring day in 1988 when I was working at Mt Lukens in the new building that we were building.  We were attempting to have everything ready to occupy the building in the beginning of June.  We had a large amount of equipment at Mt Lukens and we were paying a large amount of rent to another building owner to rent the space in their building, so we wanted to get the building done as soon as possible to avoid paying rent for additional months. 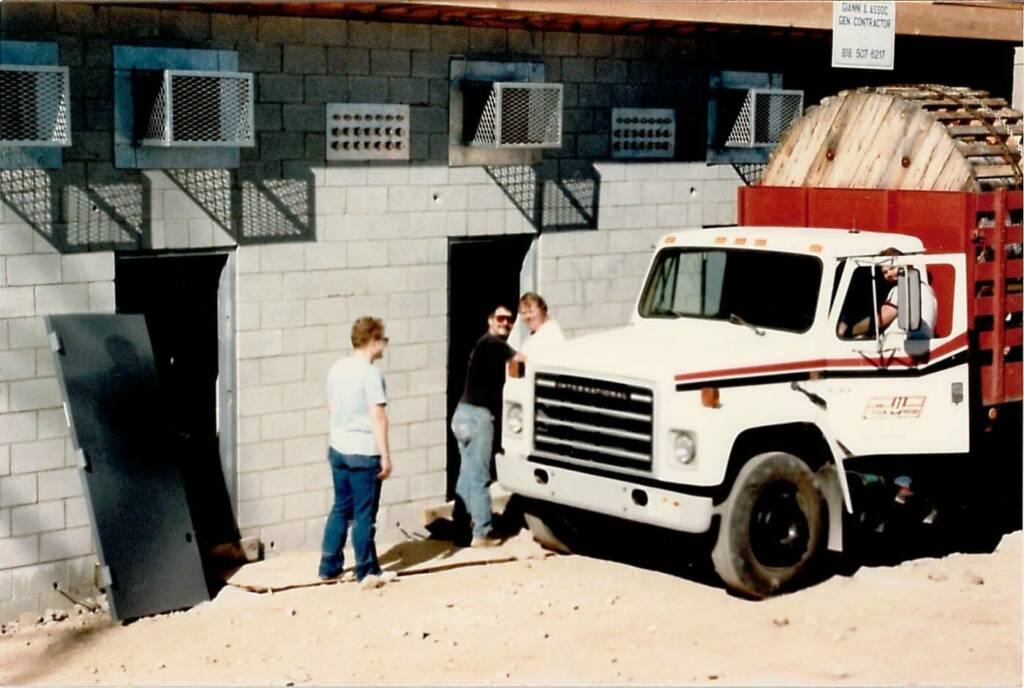 I was working on various projects in the building such as installing the racks, inside cable trays, ground wires and cable entry ports.  We wired telephone cables from the MPOE (Minimum Point of Entry) in the generator room to each room of the building so that telephone lines could easily be distributed.  Another project was working on the battery system to provide battery backup to the repeater equipment to improve reliability.  We installed 6000 amp hours of batteries representing about 7000 pounds of batteries.  Other projects involved air filters, air conditioning, electrical power for the radios, external cable trays, cables and antennas installed on the tower, tower lighting, electrical power on the tower, intercom on the tower, etc.

During the afternoon of the work session, the building general contractor came to me to let me know that he was done for the day and would be leaving the site.  A while later, he came back to the site to ask me to help with the phone company van that was stuck on the side of the road and preventing ingress and egress to the site. The phone company had been working on the phone circuits, bringing in the MPOE cable and terminations so that any required phone lines could be installed into the building whenever they were ordered.  The phone company had been there since early in the morning, so they left the mountain top around 2PM and started heading down the mountain to return to their office.  They planned to be back the next day to finish installing the phone cables and the terminations.  I was informed that they needed me to help pull them out of being stuck on the road about one mile down from the top of the mountain and since I was the only one there with a 4 wheel drive vehicle, I agreed to go help the phone company. 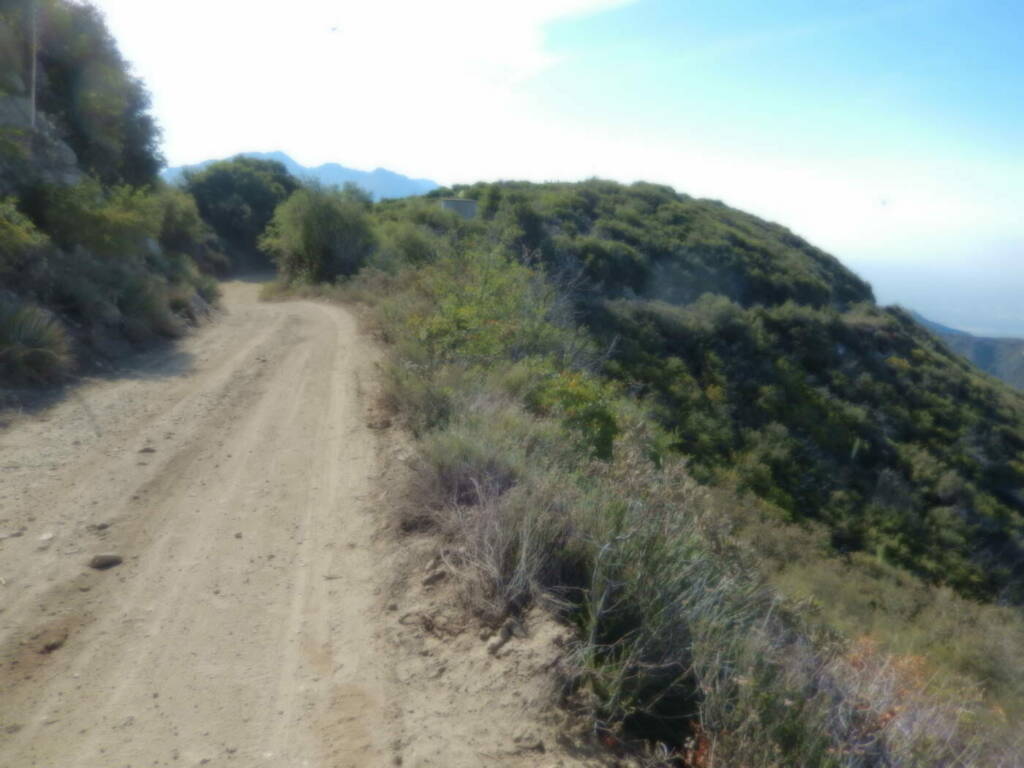 The phone men felt that I could pull them out of their predicament by pulling them up hill.  I expressed my doubt that I could do it, even with my 4 wheel drive in compound low.  Even though they were partially over the side of the road, there was not enough room for me to get by their vehicle, so I was stuck up on the mountain unless I could figure out a way to get by them if we were unable to get their van back on the road.  I reluctantly agreed to try to pull them back up the hill.  Fortunately, I had a rope that I could use to pull them, but I had to quadruple it in order to have sufficient strength.  I backed up and turned my vehicle around at the nearest point that was wide enough to do so, then backed down to the phone company van.  We attached their van to my tow ball with the rope and proceeded to try to pull them back onto the road, but to no avail.  It was too much to pull their vehicle up hill, even with their driver applying power in reverse to their vehicle to assist my pull.

After failing miserably in an attempt to pull them uphill, I told them that I felt that I could pull them out if I could get past them and pull them downhill.  However, that was a great challenge as the road was not wide enough for me to pass them at this location and there was no option to move their vehicle.  I had to drive back up the mountain to the point where I could turn around again and drove back down to where the van was stuck.  With the help of the other people there keeping a close eye on the clearance between my vehicle and the phone company van, I drove up onto the left bank of the road that went up from the road causing my vehicle to be leaning to the right at a significant angle into the phone company van.  I had to inch forward, breaking off branches of the brush on the left, fold in the mirrors and do a lot of praying that I did not slide sideways into the phone company van.  I eventually prevailed and got past the van.  I pulled forward and then backed up into position.  We attached the rope and proceeded to attempt to pull the van back onto the road.  Unfortunately, the van did not move, even with the driver applying torque to his vehicle to move it forward.  I parked my vehicle and proceeded to examine their situation more closely.  I unhooked the rope from my vehicle in case the van decided to fall over the edge so it would not take my vehicle with it.

I had to climb down the hill below the van to see what was keeping me from moving the van.  First thing we needed to do was to tie the van with rope to the brush on the upside of the hill to be certain that the van would not roll over us when we climbed down the hill below the vehicle.  After climbing down the hill and once I was in position, it became clear that it was going to take a lot of work to move the van.  The vehicle tires were over the side of the road and not on the ground.  They were almost touching the side of the hill, but did not have any weight on them.  The van was sitting on the vehicle frame and the tires on the left side of the vehicle.  Even though the road had a berm on the right hand edge of the road, the van was still leaning out over the edge of the road.  In order to move the van, we needed to get the vehicle back with the weight on the tires and off the frame.

After we completed the shoring, now we had to dig under the van to get the van off of the frame and onto the wheels.  We dug into the hill to make a ramp for each of the tires to return to the road while using the dirt to fill in additional space between the rocks.  We dug under the van to get the vehicle off the frame and also used that dirt on our makeshift road shoring.  After about an hour of road work, we felt that we were ready to make another attempt to drive the van back onto the road.  All of this work was done while keeping an eye on the van to be certain that it was not going to break loose and roll over us and crush us to death.

Now was the time of reckoning.  The two hours of work would either pay off, or possibly, we could loose the van over the side of the hill.  Everyone was tense, even though we were generally optimistic that our efforts would be successful.  We attached the phone company van to my vehicle again, doubling up the rope three times to make certain that it did not break.  The driver started the van engine and I had him turn the wheels slightly to the left to follow the ramps that we built for the tires over the side of the road.  Just in case the vehicle went over the edge, I instructed the driver to stand outside the vehicle with the door open while applying some gas with his right hand on the gas pedal.  With my vehicle in 4 wheel low, I pulled in the slack in the rope and got it taught so that there would not be any jerking motion.  I told the phone man operating the van to apply some gas, enough to place moderate tension on the drive train, but not enough to move the van.  I then proceeded to apply gas to my vehicle while stepping on the brake to have significant torque on instant notice.

Everyone was ready.  All precautions had been taken.  All of our knowledge and engineering skill was in play.  The moment arrived.  We held our breath while I applied more gas and eased off the brake.  My 4 wheel drive began to move slowly with a firm grip on the road.  I listened for the snap of the rope, but none was heard.  I looked in my rear view mirror and saw the van moving slowly while following my vehicle.  I continued to pull forward for about 15 feet and then instructed the phone company driver to get into his vehicle.  We continued forward for another 25 feet until the van was completely back on the road and safe from going over the edge.

It was a time of rejoicing, for we had starved off a major problem with ingenuity and perseverance.  We all hugged each other and shook each other’s hand.  We praised God for his wisdom and his help in allowing us to find the solution.  But soon it was time to return to the reality of what had happened.

I had asked the phone man if I could get paid by the phone company for my rescue work.  He indicated that there was no mechanism to reimburse me for saving their vehicle (and possibly their lives) and avoiding the necessity to have them rescued.  I asked him what would happen if he needed to call a tow truck.  How would the tow truck get paid?  He said that they have a contract with towing companies to tow phone company vehicles.  I asked if the tow companies get paid.  He indicated that they do, but they still could not pay me for the rescue.  I dropped the subject.