It was supposed to be a busy day since I had two different mountains to service that day.  My first stop was at Sierra Peak, a two hour drive from my house.  The road to Sierra Peak is via Skyline Drive in Corona, a dirt road that is usually in reasonable shape, but not always.  Today, the road seemed to be in good shape and the trip to Sierra went off without a hitch. 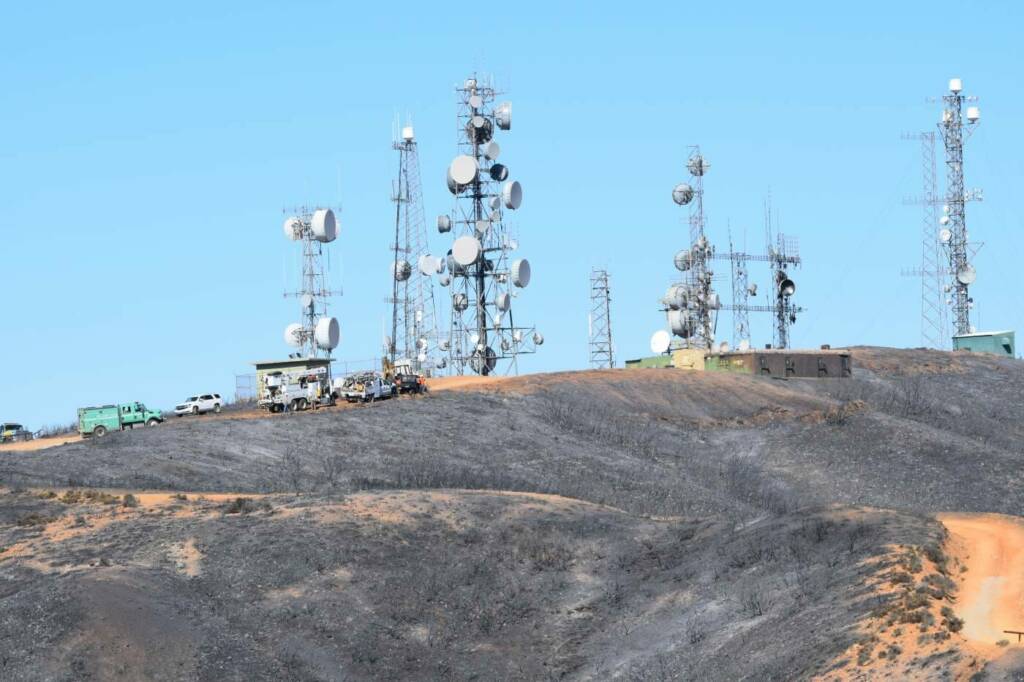 After finishing with Sierra Peak, it was time to head to Santiago Peak.  There are two basic ways to get from one peak to the other.  The first method is to drive down the mountain, head to the road to Santiago Peak and then head up the mountain.  The second method is to drive the Main Divide Truck Trail which runs across the top of the ridge that connects the two peaks together.  That day, I chose to take the Main Divide Truck Trail since I had not been on the road for at least two years and I wanted to do something different.  The road between the two sites takes about the same amount of time as driving down the mountain and driving up the other road to Santiago Peak, so it does not save time either way.

I left Sierra Peak and drove back to Skyline Drive.  At the intersection of the two roads, turning left would take me down the hill into Corona.  Turning right would take me across the top of the hill on the Main Divide Truck Trail.  I turned right and proceeded to head towards Santiago Peak.  About 10 minutes up the road, I reached the gate across the road that prevents people from traveling the Main Divide Truck Trail.  As I approached the gate, I noticed that there was a section of the stone wall that was knocked down and looked like one could drive through without stopping to open the gate and relocking the gate after driving through the gate.  This section of wall had been knocked down for several years, but I had never tried to go through that section of wall because I always stopped to open it with the key and relock it after I drove through the gate.  Today was going to be the time that I went through the knocked down section of the wall.

I left the road by bearing right to get onto a reasonably flat section of the road and headed towards the section of the wall that crumbled.  As I approached the section of wall, I paused to inspect the area without leaving the car to be confident that I was not going to get myself into trouble.  Everything looked good, so I proceeded slowly because I was not on an improved road.  As I was passing through the downed wall, I continued to look carefully at what I could see which was limited.  The ground was rising as I was passing through the wall and with the hood of the Tahoe in front of me; there was only a limited view of what was ahead.  The next thing that I knew was that I was in serious trouble.  The front tires were hanging in mid air spinning and I was sitting on the frame of the Tahoe.  The ground had stopped rising, flattened for about 1 foot, declined for another foot and then there was a ditch that had been dug by a backhoe to prevent people from driving through the knocked down section of wall.

When I got out of the car to look at my situation, I stood there in a state of shock wondering why I had done something so stupid.  When on mountains, getting a tow truck is usually and difficult and expensive process.  The gate at the bottom of the road is locked and tow truck companies generally do not have the key.  That means that either I have to walk down the mountain to the gate to let the tow truck through the gate or I have to get someone to meet the tow truck at the bottom and escort them up the mountain.  After gathering my cool, I called on the two-way radio for help.  One of our other technicians was available and said that he would head up the mountain to assist in pulling me out of the situation, but it would take him 2 ½ hours for him to get to where I was stuck.  So I had time to consider my stupid stunt and try to figure out if there was a way to get out of the situation.

I looked around to see that was available to get me out of the situation.  There were a number of rocks from the fallen section of wall.  I decided to grab some of those rocks and start filling in the ditch under my car tires.  After quite some time, I had managed to build up the rock piles almost to the height of the tires, but this was still not good enough.  I started hunting around to see what else I could find and after about 10 minutes, I found a piece of wood that looked strong enough to support the weight of the vehicle.  I took it back to the ditch and figured out that I could dig a small footing on the edge of the ditch to support one end of the wood and the other end of the wood would be supported by the rocks that I piled into the ditch.  I proceeded with the plan and created a ramp for the front right tire to get back on solid ground.  I continued to stuff rocks under the wooden plank to get the ramp up to the height of the tire.

This looked promising, but still would not get me out of the situation.  I needed to be able to do a similar thing with the other tire and still had to deal with the fact that the vehicle was sitting on the frame and not supported by the tires.  So I went on the hunt again for more material.  It took another 30-40 minutes before I found another piece of wood that seemed like it could be used for the other tire.  I took the piece of wood and proceeded to work on the front left tire by piling more rocks, digging a footing for the wood at the edge of the trench and stuffing rocks under the wood so that the end of the piece of wood was raised up the height of the tire.

Now came the last task of digging under the vehicle.  One side at a time, I dug with my small shovel under the car and used the dirt to fill in between the rocks holding the wooden ramps.  I continued to dig from one side of the car until the frame was no longer in the dirt.  I then went to the other side of the car and started digging under the car to get that frame member off the dirt.  After about 2.5 hours, I finally had the vehicle on all 4 wheels and off the frame.  The big question was will it work?  Will my “bridge” hold up while I apply torque to the wheels and not fall apart?

As I was finishing the final preparations, the cavalry arrived.  Our technician arrived with pulleys, ropes, tow straps and other materials that he felt could be used to get me out of my predicament.  He got out of the car and looked at the situation, shook his head, made a brief remark acknowledging the fact that I had been stupid and agreed with me that I should try to back the car out of the trench with the bridges that I had built.  I got into the car, started the engine, put the vehicle in 4 wheel drive low (the vehicle was already in 4 wheel drive high), placed the transmission in reverse and proceeded to gently press the gas pedal.  The vehicle slowly started to move backwards and after about 3 feet, it was apparent that I had been successful in saving my own hind end this time.

I have never tried anything similar since that time.  What seemed like an innocent shortcut turned out to be a disaster and a mistake.  The good news is that I lived to learn from the mistake.