We had planned a trip, on a Sunday, up to Mount Lukens to diagnose and hopefully repair a repeater that had gone off the air. The previous day I was at an Amateur Radio lunch, and someone warned me that a recent storm had caused a landslide, which had blocked the dirt road. Some details were lacking as to how bad the land slide was, and it’s exact location. The person thought it was near the top, so we decided to go and see what we could do, possibly clear some debris or hike the last portion of the road with what was needed to do the repair. Sunday morning we packed everything we could thought we might need in to the 4wd Suburban and started up the mountain.

On the way up it was obvious that the road had suffered some damage. There were more ruts and ditches to be careful of, and some small rock slides to go around. 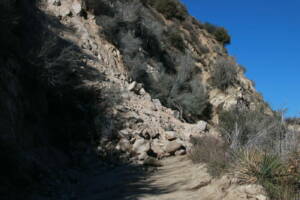 Then we came to the main problem, a landslide that had entirely blocked the road, and much larger than we could move with a shovel or a tow strap. The unfortunate thing is that we were still 3.5 miles from the top of the mountain, which is about half way up. Rick decided that he would attempt to hike the rest of the way and we loaded what we thought he could carry in to a backpack. Much of the equipment was just too heavy so we had to be very selective.

Rick started on his way up, and I stayed with the vehicle since I had surgery earlier in the year, and wasn’t quite up to a hike this long yet. We kept in touch by radio as Rick made his way up. It took a couple hours to reach the top because of the climb. Shortly after he arrived, Rick found the problem, but the equipment to do the repair was still on the vehicle, and the hike was much too long to make another trip. Rick did what he could, then started back down the mountain. 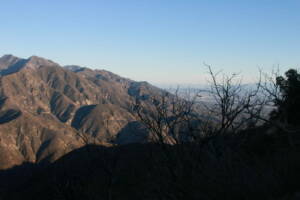 While I was waiting I did some pictures, and documented the exact location of the landslide. It was starting to get dark, so I decided to turn the vehicle around so we would not have to back

down the road in the dark. The other issue is that I was drawing attention from hikers that though I was stuck. So I backed down the road a quarter mile to a spot wide enough to turn around, then backed up the road to the landslide again so the Rick’s hike would not be any longer than necessary. This changed the perceptions of the hikers passing by. One of them asked how I knew to back in. It was well in to darkness by the time that Rick got back. We were still in touch by radio, but he was unsure of how far away he was until he could hear my horn. We started off down the mountain.

The very next morning someone called me on the radio to tell me the power was out on Mount Lukens, this meant the standby power had failed. A significant problem since the road was still blocked by the landslide, and there was no way to hike up there with replacement batteries and tools for the generator. Fortunately it was not out very long, and about 3 weeks later the road was cleared and we were able to go up and make the rest of the repairs.