It was a day just like any other day when we headed to Santiago Peak to work on several repeaters.  We planned to be there most of the day so that we could take care of a number of issues on one trip to the site.  Most repeater sites take a considerable amount of time to reach and Santiago Peak was no different.  It is a 2 ½ hour drive from my home and about a 2 hour drive from the office, depending upon traffic.  It was 1985 and traffic in the Los Angeles was significant, but it was a shadow of what it is like today.  These days if we tried to leave the office at 7AM to go to Santiago Peak, we would not be there until about 10AM inheriting a minimum of a 1 hour delay.  Back in 1985, the delay was minimal heading to Santiago Peak since most of the route is going against the major flow of traffic.  Today, things would be very different.

We left the office at 7AM and headed east on Highway 91 Freeway passing through Cerritos, Buena Park, Anaheim, Anaheim Hills and headed south on Highway 57 and exited at Chapman Ave in the City of Orange.  We headed east on Chapman Ave and merged onto Santiago Canyon Road.  We continued until we reached Silverado Canyon Road where we turned left.  We then proceeded to drive to the end of the paved road which was at the US Forest Service gate and continued forward onto the dirt road.  Back in those days, the road would typically take about 45-50 minutes to drive up to the top where the repeaters were located.  These days, the same trip takes about one hour due to changes to the road which necessitates driving the road at a slower speed.

We arrived at the site around 9AM and proceeded to park the van and open the building.  We had a large number of conventional GE Mastr Pro repeaters which we had purchased from another company.  We were working on upgrades to the repeaters to make them more reliable and easier to service.  The program was to make everything interchangeable from one repeater to another, thus facilitating ease of maintenance in the future.  There was one repeater that was having some difficulty so we had planned to service that repeater during our stay for the day.

We started the work by installing some of the new equipment that we brought with us.  We assembled the metal framework for holding the new cavities that we were installing which were designed to reduce or eliminate radio interference to the different repeaters.  Cavities are hollow metal cans that are electrically resonant at radio frequencies that are adjustable based upon the physical characteristics of how they were manufactured.  So we assembled and installed the framework and then installed the cavities in the framework.  It was then necessary to install the jumper cables that we had pre-made at the shop.  The cables were high quality silver plated double shielded cables to keep from picking up extraneous signal through the cable.  The cavities were being used as frequency selective filters which were tuned to the receive frequency of the repeaters to prevent unwanted signals from reaching the receivers.  At a site like Santiago Peak, there is a lot of radio interference running around the hill from the hundreds of radio transmitters present.  So we worked hard to get this project done and completely wired before leaving the site for the day. 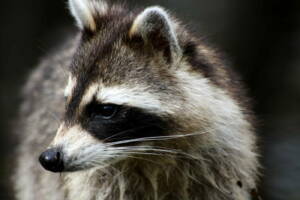 Once we had the project up to the point where I could break free to work on the repair of the repeater, I went outside to grab some items from the van at which time I spotted the raccoon.  I went back inside the building and grabbed John to drag him outside to see the raccoon.  The raccoon seemed to be friendly so we mostly ignored the fact that he was there.  They have a reputation for having a temper, so we thought that we should leave it alone and that he would eventually leave.  We went back inside the building and proceeded to eat lunch thinking the raccoon would leave.  However, when we went outside again, the raccoon was still hanging around and had decided to make himself comfortable while going to sleep inside the van on the carpeted floor in which had left the sliding door open.  So now I had to get inside the van to use the service bench to perform the repair to the repeater transmitter which I had removed from the repeater inside the building.  I was careful not to disturb the raccoon while I worked at the work bench and after about a half hour, I had the transmitter fixed and back together.  So now I had to quietly get out of the van without disturbing the raccoon and returned the transmitter to the repeater.  I fired it up and everything seemed to work OK.

So now I was able to go back to assisting John with the cabling of the cavities.  About 3PM, we were finished with the job and it was time to clean up.  When we went outside, the raccoon was still sleeping in the van.  So now we were faced with figuring out how to get the raccoon out of the van without endangering ourselves.  Besides having a temper, raccoons have claws that are not especially sharp, but sharp enough to be on concern.  We were both wearing hi-top work boots and blue jeans which provided reasonable protection from the raccoon, but not absolute protection.  He could still inflict some pain and might be able to break our skin underneath the jeans, so we wanted to come up with a way to entice him to leave the vehicle.  Waking him up with some loud noise was easy to do, but we needed a way to entice him to leave.  So we took our bag of Doritos corn chips and started munching on them after waking him from his sleep.  We then offered him a chip while he was still in the van.  He liked the chip, so we offered him more chips making a trail from where he was sleeping that led out of the van to the sliding door. 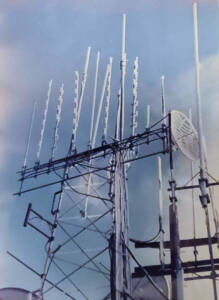 John grabbed the bag of chips and dropped some on the ground outside the van and the raccoon decided to take him up on the offer of free food.  So the raccoon jumped down and started eating the chips left on the ground while we both backed up to give him some buffer space.  However, he liked the chips so much, he walked over to John and got up on his hind legs begging for more chips.  So John decided to keep feeding the raccoon more chips which he threw at the raccoon and the raccoon managed to catch the chips in mid air, a trick that I have taught to my dogs.  However, this raccoon did not have any formal training (of which we were aware) since it was a wild animal, so we were a bit surprised that he was able to catch the chips in mid air.  So John kept throwing him chips which he kept catching and eating until something happened to startle the raccoon.  At that point, the raccoon barked and snapped at John who instinctively kicked the raccoon hard enough to make him fly about 10 feet before hitting the ground.  At this point, the raccoon scurried away and did not seem to have any desire to have any additional contact with us.  The feeling was mutual as it was time to pack up and leave so we did not want the raccoon around making the job difficult.

We locked up the building and started the van.  Our standard practice was to back into the parking space so that we were already to leave on short notice, so we proceeded to pull out and start heading down the mountain.  The trip was uneventful as we reached the gate at the bottom of the dirt road.  We went through the gate locking it behind us and proceeded down the road.  Now we were able to participate in the coasting contest that starts at the gate and ends shortly after the church and shortly before we reach Santiago Canyon Road.  The road is downhill almost the entire route and the contest was to go as far as possible without applying any gas, so we placed the transmission in neutral and proceeded to head downhill.  There was a rise in the road about 1/10th mile ahead so it was a little challenging to get past that point.  Then comes the downhill for many miles on a very narrow two lane road.  Each lane of the road is barely wider than a normal vehicle and in many places there was a rock wall that was built up to the edge of the road.  So traveling at high speed that one could achieve by coasting down the road along with the many twist & turns followed by the pedestrian & vehicular traffic is problematic at best and either dangerous or reckless at worst.  There are two places where the road goes through a small town that has a speed limit of 25MPH, but if you slow down to the speed limit, you will never win the contest.  There is an uphill rise just past the church after a long flat area that kills your speed that has to be overcome, so having sufficient speed is required to get over the hill.  So the contest involves finesse, a challenge and a careful balance of risk verses safety.  Today was not the day to break the record, but it still was a good day.  We managed to get back to the office before 5PM and had a successful day.