It was in early March when we were contacted about installing a DAS system in the City of Riverside.  We had never worked in Riverside before, so it was a learning experience to wade through the requirements of their bureaucracy.

Once we were contracted to install the system in the building, we immediately went to work on the plans for the system.  We drew the plans and sent them to our draftsman so that he could create the CAD drawings required by The City to obtain the permit.  The plans were submitted, checked and return several times.  The plan checker at The City was new to the job and not well trained.  He made conflicting demands for changes to the plans and required us to interface with other City personnel who expressed surprise over our request based upon the demands of the plan checker.  Eventually, we were able to obtain the permit, but not without spending at least 10 times our estimated time to obtain the permit. 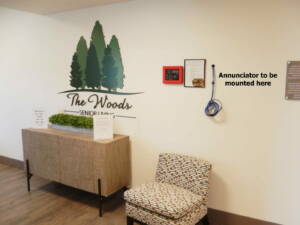 The main entry before we mounted the DAS annunciator

While the permit process was proceeding, we were working on obtaining any materials that we needed for the job that we did not have in stock.  We had the majority of the materials in stock such as cable, connectors, signal splitters, battery systems and 700MHz BDA.  We needed to obtain the correct base station antennas, the UHF BDA, dual band service antennas and the alarm annunciator for the lobby.  Each of these materials were obtained on time prior to the start of the work except for the annunciator which was shipped to the wrong address due to a clerical mistake by the distributor.  The problem was corrected and we eventually obtained the annunciator after the balance of the project had been completed.

The day before the job, we had to prepare for the job by loading up the vehicles with the materials for the job.  The bulk of the items including all the large items were placed into the van.  Other smaller materials were loaded into other vehicles along with any special tools that we needed in addition to the normal tools that we carry.  This way, we were ready to attack the job first thing in the morning and avoided killing half the day’s work by having to load the materials for the job and then driving to the job instead of just starting the job.

We arrived at the job site to start the installation Thursday morning at 8AM.  We unloaded the materials and brought them into the building.  Since all surfaces were finished, we had to take care while moving our materials to avoid damage to the walls, floors and paint.  The materials were stored in one of the empty apartments that was used as a workshop for the maintenance manager for the project.  There, we were able to grab whatever we needed without the long trip to the vehicles and we were able to leave the materials on site without having to take them back and forth from our office to the job site. 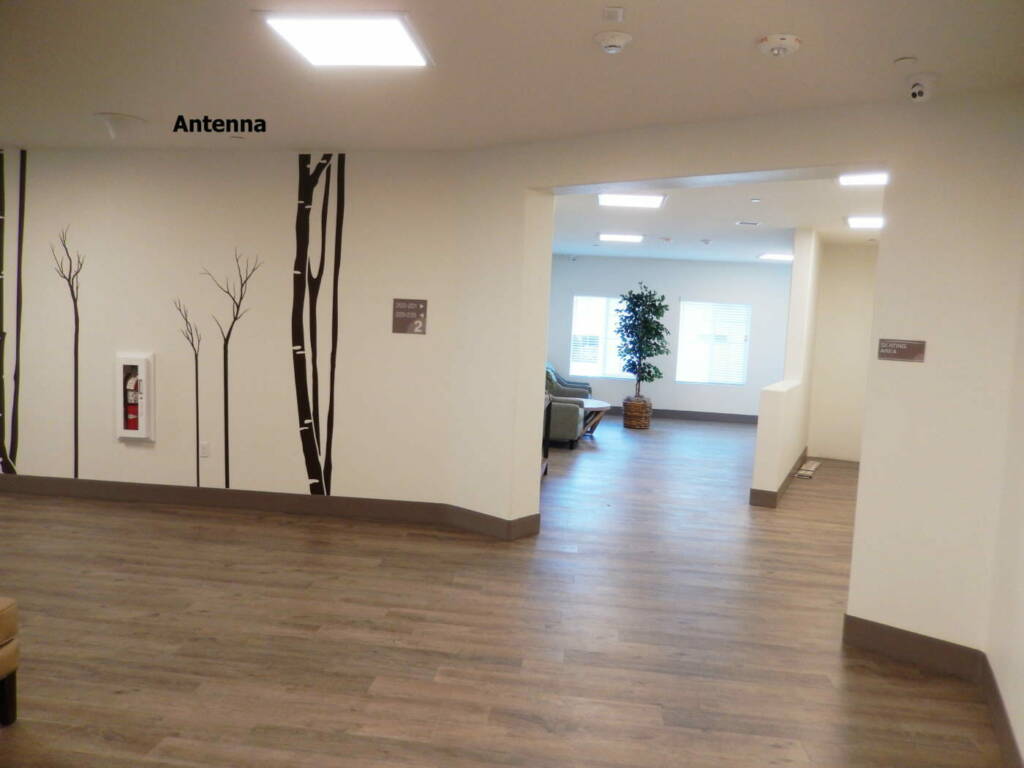 The picture above shows one of the antennas resembling a large smoke detector mounted to the ceiling near the upper left corner of the picture.

We started by running the cables on the upper floor.  There were 4 people in our crew plus I was running down incidental materials for the job which included Dragonskin cable, a very expensive 2 hour fire resistant cable plus the connectors.  The ceiling had a limited number of access panels, but there was an attic area which allowed us to crawl inside the ceiling to get the cables run from one area to another.

Our plan called for eight antennas on each floor, so we started in one of the three hallways running the cable.  As we managed to get each cable installed, we installed the connectors on the cables, attached the signal taps and connected the antennas.  We continued to work our way around the building hallways in an attempt to complete all the wiring on the 2nd floor in one day.

We broke for lunch after working for 5 hours.  After lunch, we went back to running the cables, but the heat of the day in the attic was making it difficult to work.  We finally quit early for the day due to the heat while completing approximately 75% of the 2nd floor wiring.

Antenna on first floor off center due to lack of access.

The next morning, the four man crew worked on finishing the 2nd floor before the heat of the day made it difficult to work in the attic.  We finished the 2nd floor wiring including mounting of the antennas, so we now moved down to the first floor which contained different challenges.  We did not have any heat issues, but there was insufficient space to crawl through the ceiling.  Most of the access doors to the interior of the ceiling area were about 1 foot square which made it difficult for us to see inside the ceiling and almost impossible to get our hands inside to push or pull on the cable with our head inside to be able to see what was happening.  There were a lot of other items in the ceiling area such as electrical, plumbing, fire alarm and air conditioning which made fishing the cables more difficult.  We were unable to use a snake most of the time, but were able to use fishing poles to get a pull string through and eventually pull our antenna cable into the ceiling.  We worked until the end of the day Friday when it was time to go home and we had completed about one half of the downstairs

We returned on Monday morning with a 3 man crew to finish up the antennas on the first floor.  However, I was able to join the crew and worked on getting the electronics unboxed and mounted in the DAS room.  The crew finished up the cables, antennas and signal taps on the first floor, but now had to run the CAT5 cables to run the annunciator that needed to be installed in the lobby.  We did not have the annunciator due to the shipping problem from the distributor, but we worked on getting the wires pulled from the DAS room to the annunciator panel location.  Unfortunately, this required cutting a hole in the ceiling to get the wires pulled which we called a DAS hole.

Up on ladder with his head up a DAS hole.

We then had to pull the wires from down the hall to the DAS hole, then bring the wires over to the wall in the reception area where the annunciator was to be mounted.  This required one of our men to climb up a ladder and look inside the ceiling to find the wires, pull the wires through to the hole and fish the wires down the wall to the future location of the annunciator.  Once that was done, we were finished for the day.

On Tuesday, we returned to finish the majority of the installation.

The antennas on the roof had to be mounted to the parapet wall to secure the antennas so that they would not move in the wind.  We mounted Unistrut to the parapet wall and clamped the pipe to the Unistrut.  We then mounted the antennas, jumpers, cables and the lightning arrestors and sealed up all the connections with outdoor heat shrinkable tubing which contains sealant to prevent water intrusion.  This made for a secure installation that should last for 50 years.

The crew continued wiring the system and before they left for the day, the system was on the air and operating.

The next Monday, we received delivery of the annunciator panel from the manufacturer, so we scheduled to return to the property on Tuesday.  We went there to install the annunciator and provide the connection of the annunciator to the alarm system.  The alarm contractor was present and all of the connections between our system and the alarm system were completed and tested.  We also made some adjustments on the signal levels to the upper floor to reduce the signal levels because there was too much signal from the upper floor leaking through to the roof antennas which reduced the antenna isolation to an unacceptable level.  After making the signal adjustments, all was good and the system tested out properly.

We called for inspection which required several steps.  First, we had to get the electrical inspector to inspect the electrical work.  Then we had to get an independent certification agency to check the signal levels in the building which we had already done to verify that our system was working, but as the installation company, we are not allowed to certify the operation which must be done by an independent certifying agency.  (Many cities will allow us to certify the system, but then we are not allowed to install the system.)  After they passed our system on the first try, we had the fire inspector inspect the work.  Then we had to call the City inspector that spot checks the work of the independent certifying agency to verify their results.  After that was done, we  got the fire inspector to complete her inspection where she verified that all of the alarms worked properly that notify the appropriate people in case something goes wrong with the system.

Another rush job finished on time to save the project……….