A Trip to Tejon Mountain

It was a November weekend day when I went to Tejon Mountain near Gorman to take inventory of the site equipment and record some serial numbers for the accounting office.  By having the serial numbers, we can tie a specific piece of equipment at the site to the invoice which gives us the ability to be far more accurate with the cost of building a site.  Additionally, if something is stolen, we have record of the site inventory which makes an insurance claim far easier than attempting to guess what was missing.  Part of the process of taking inventory includes taking pictures of the equipment at the site which enhances our documentation. 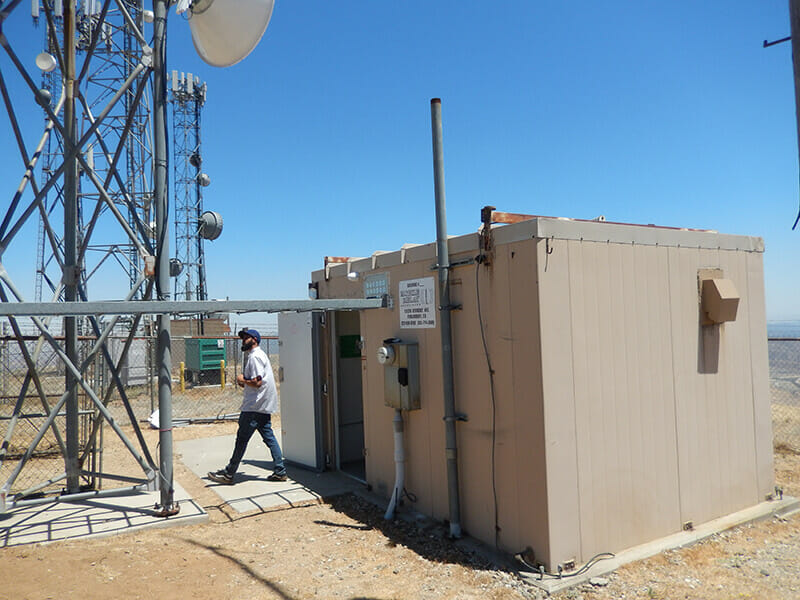 I started by getting into the car on a Saturday morning and heading north on Crenshaw Blvd towards the freeway.  The traffic was typical for a Saturday morning slowing down considerably to a crawl at Charles H Wilson Park due to the street market that is held every Saturday at the park.  After passing the park, traffic returned to normal as I continued north to the San Diego Freeway (Interstate 405).  Getting on the freeway, one would expect that traffic would flow smoothly, but like most of the Los Angeles area, traffic is a 7 day a week item and the Saturday morning traffic has built up to the point of significant slowing.  This continued as I headed north on the I405 until I reached the Westwood area where traffic broke up and returned to full speed through the Sepulveda Pass.  As I traveled further up the I405, traffic continued to flow until I reached the North Hills area where traffic slowed down to 20mph to demonstrate that you can’t go anywhere in the LA area without encountering some traffic.  This slowing was typical due to the merging of the I405 with the Golden State Freeway (Interstate 5), then the Foothill Freeway and then California Highway 14 along with the traffic that heads to Magic Mountain which is immediately adjacent to the I5 freeway a few miles north of my current position.  I slowly moved my way through traffic listening to the radio to help fend off the boredom of sitting in traffic.  We slowly worked our way through the traffic heading up the I5 freeway until we reached Magic Mountain at which point the traffic broke up and returned to full speed.  It was another 30 miles north on the freeway until I would reach the Gorman exit where I got off the freeway and turned right to head east on Gorman Post Road until I reached the turnoff to the “cellular towers”.  The gate across the road has always been a bit difficult to operate because the gate post has tilted making the gate scrape the ground when one attempts to swing the gate open to let the car onto the property and head up the mountain to the radio towers. 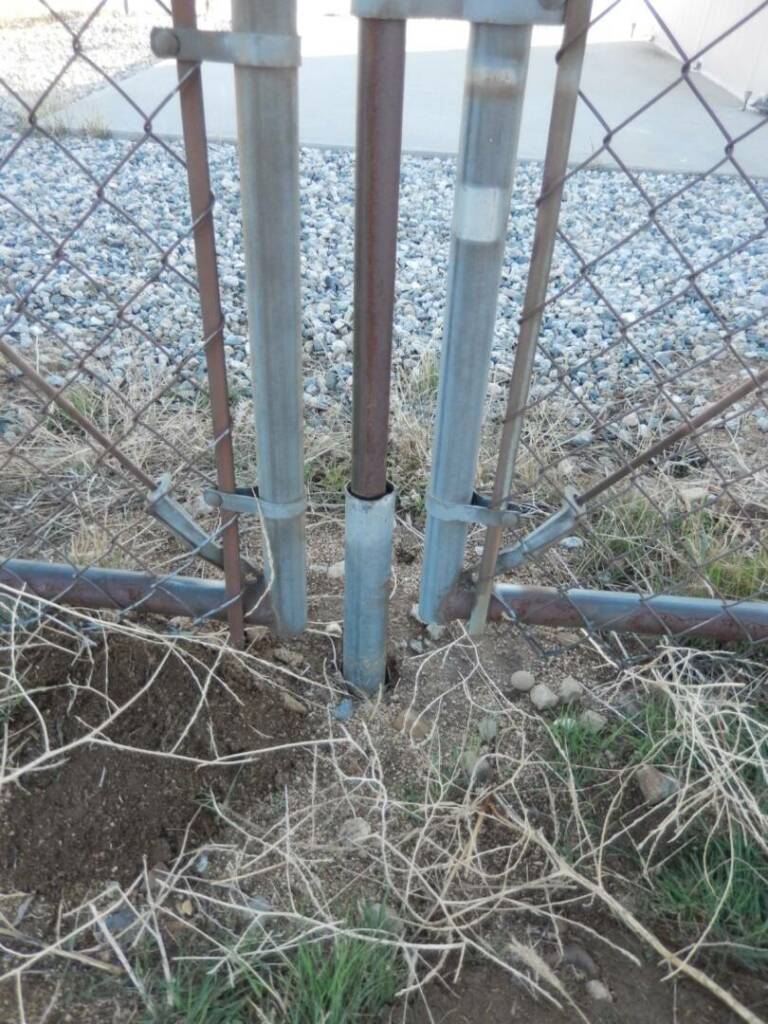 After going through the gate and closing it behind me as requested by the property owner who wants the gate kept closed at all times, I drove by the residence at the bottom of the road and started climbing the hill.  The Edison Tejon Mountain Road was a wide and well groomed dirt road for the bulk of the travel, but there were a few sections of the road that were not in good shape which required me to slow down to a crawl.  For the first half a mile, the road climbed gently until I reached the first switchback where the road became considerably steeper.  For the next 3.5 miles, I continued up the road heading towards the radio towers until I finally reached the summit where the towers were located.  I drove past several towers belonging to various cellular carriers until I reached the MRA building where our equipment was located.  I drove up to the gate, placed the vehicle in park while I searched for the keys to the building.  Once I located the keys, I exited the vehicle to unlock the gate.  I inserted the key into the padlock on the gate, opened the lock, removed the lock and proceeded to lift the gate locking post to find out that the gate post did not want to rise up out of the metal sleeve that was set into the dirt.  It appeared to be frozen to the moveable gate post; not frozen from temperature but frozen via the dirt that gathered inside the pipe, became wet and dry over time eventually causing a bonding together to occur.  This prevented me from raising the locking post to open the gate.

This presented a unique problem.  If I cannot open the gate, I cannot go into the building to perform my tasks.  Admittedly, there was nothing urgent about what I had to do, but it would be a waste of time to leave and have to come back to perform the task.  Additionally, when I could return to the site, I would still have the same problem with which to resolve.  So I could leave and come back another time, but I felt that it was a more prudent use of my time to fix the problem while I was at the site and not come back to fix it at another time.  I did have plans to do other things later in the day, but there was nothing that was scheduled at specific time.  Since I was not on a tight time schedule, I started digging for tools to work on the problem.

I went around the back of the SUV to open the hatchback and access my tool box.  I gathered some screwdrivers, wrenches, hammer and channel lock pliers.  I tried hammering on the pipe to break it loose, but to no avail.  Unfortunately, the only hammer that I had

was a ball peen which does not have a great amount of force when swung.  I might have been able to free up the sleeve from the gate post if I have a normal hammer or a small sledge hammer, but that was not in the cards.  I tried using the channel lock pliers to twist the two pieces of pipe apart, but I could not get a good enough grip on the pipe to apply the required torque to separate the two pieces of pipe.  Next I tried hammering the fence locking post where the brackets were located to try to separate them.  I made slow progress separating the two, but I could not get them far enough apart to get them to disengage.  I then tried loosening the clamps that held the post to the gate and slide the brackets so that I could raise the post high enough to get it out of the ground along with the pipe sleeve that was buried in the ground.  This seemed to be the only way that I could get the gate open and fortunately, it worked well.  I was able to get the gate open so now I could enter the compound to get to the building.

I grabbed the keys to the building then proceeded to unlock the doors.  I entered the building with the paperwork so that I could record the serial numbers of the equipment, take pictures and take inventory of all the items.  I got out my pen to record the serial numbers on all the items in the site including all the repeaters, transmit combiner, receiver filter, receiver multi-coupler and any other items where I could locate a serial number.  I turned on the camera and took at least 20 pictures detailing the equipment and wiring configurations.  It took me about 30 minutes to thoroughly document all the details, however now it was time to lock up the building.  I turned off the lights, closed the doors and placed the locks on the door.  The tomb was sealed and ready for me to leave.

I walked out to the gate and attempted to close it, but the problem with the gate had not gone away.  I placed the paperwork in the car and then returned to the gate so that I could secure it well enough to leave the site with confidence that the site security was reasonably secure.  I reversed what I had done to open the gate and got the gate locked.  The site was now secure enough for me to leave.  I got into the SUV and started heading down the hill.  Being careful to avoid some of the ruts in the steep sections of the road, I slowly drove down the road until I got back to the gate at the bottom of the road,  Now I had to fight that gate again which was becoming increasingly difficult to operate.  When I first started going to the site, the gate was only a mild problem to open and close.  Now the gate has become a major issue which requires considerable strength to operate.  After my ordeal at the top of the mountain, I was not looking forward to having to fight the gate again at the bottom of the dirt road, but there was no choice if I wanted to leave the site.  I had to pick up the gate and was able to move it about 1 foot at a time before it dug into the dirt again.  Repeating this process about 15-20 times allowed me to get the gate open.  I then drove through the gate and had to wrestle the gate closed after I was on the outside of the gate.  Repeating the process again required a considerable effort, but I managed to get the gate closed and locked.

Now it was time to drive back to the freeway which took a few minutes.  Arriving at the freeway, it was time to stop at the local “choke and puke” to clean up and get something to eat and drink.  So after resting up, I got into the SUV and headed south towards Los Angeles.  There was traffic on Interstate 5 around Magic Mountain and again in the Culver City area, but eventually I made it to the Century Freeway and headed back to the office to work on some items that needed attention.

What started off to be a simple administrative mission turned out to be far more difficult than originally anticipated.  This is not unusual for things to go wrong when making a trip to one of our tower sites.  Fortunately, the problems encountered this time were not so severe that it compromised the mission.