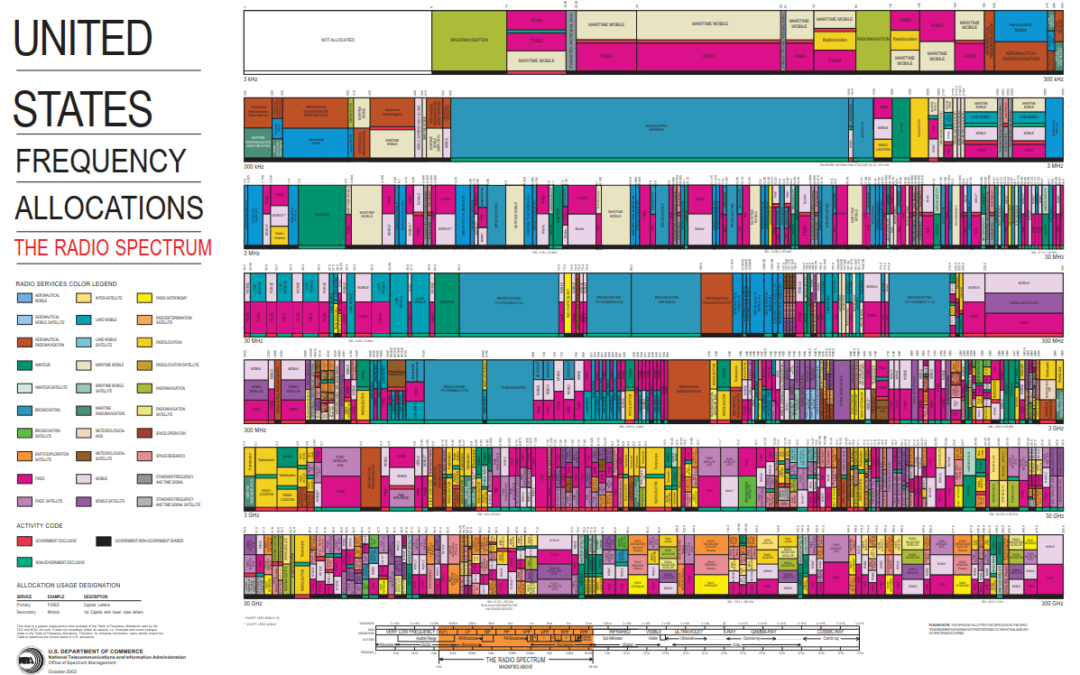 Shared frequencies are like the old party line phones.  When you would want to make a call, you would have to pick up the phone and listen to find out if some else is using the phone.  If they were in the middle of a call, you would hang up and wait a while until you thought the conversation was finished.  You would then pick up the phone again to see if it was still in use.  This could continue for quite a while until the conversation is finished, at which time you can now place your call.  (This is effectively the same thing that happens these days with your home phone if you are on a call using the home phone and someone else who lives at the house also wants to place a call on the home phone while it is still in use.)  At times, there are significant delays incurred in using the shared facilities while other times there are no delays.

Shared spectrum is readily available for a minimal cost, but you are required to monitor before transmitting.  When on a shared channel, the FCC requires that each licensee monitor to see if someone else is using the frequency prior to transmitting.  The reason for that requirement is to prevent your transmission from interfering with the transmission of the other people with whom you are sharing the channel.  The FCC rules also require that you share the frequency and not monopolize the frequency, to avoid creating a de-facto exclusive frequency for which you are not licensed to operate.  The FCC has cited, fined and ordered licensees to “cease and desist” when they have operated trunked radio systems that do not monitor the shared frequencies automatically while the subscriber radios were operated without monitoring the frequency or even having a method to monitor the frequency, thus causing interference to the co-channel user.  The numerous co-channel users have just as much right to use the frequency as your radio system and the FCC will not give preference to you over any of the other users.

What is the benefit of exclusive spectrum? 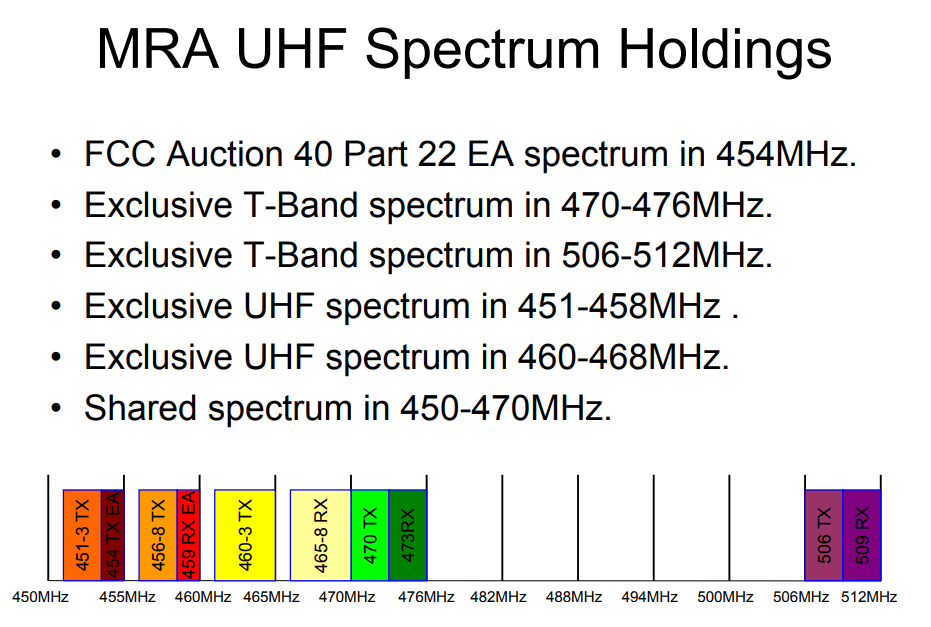 Above is a look at the UHF radio spectrum with a summary of the MRA channel holdings.  The majority of our channels are exclusive which are located in several different portions of the UHF radio spectrum.  These channels are utilized in our analog and digital radio systems that we operate to provide communications via our radio networks.  These networks perform exceptionally well due to the lack of interference from co-channel users.

Need someone to solve your radio spectrum problems?

The History of Exclusive Channels.

The FCC has issued exclusive channels in the distant past for the cost of obtaining the license which is a few hundred dollars.  Soon, the FCC realized that there were always more license applications for the exclusive channels than frequencies available which caused a situation of mutually exclusive applications.  In order to resolve that problem, the FCC instituted a lottery system to issue exclusive spectrum.  However, in the mid 1990’s, the FCC realized that there was a significant market for exclusive spectrum and that it was not in the best interest of the US Government to continue to give away the exclusive spectrum for the cost of a license application, but to sell it at auction to the highest bidder.  Commercial spectrum for the large cellular carriers is sold at auction for BILLIONS of dollars.  The FCC has held over 80 separate auctions bringing in huge amounts of money (mega billions) to the US Treasury for commercial spectrum (cellular, PCS, Advanced Wireless Services etc.), land mobile two-way radio, aircraft, marine, satellite, TV, broadcast radio and many other services.  Therefore, almost all spectrum that is exclusive spectrum is sold at the FCC auction whenever they decide there is spectrum available to sell and that there is likely to be enough buyers to purchase the spectrum.  Spectrum auctions are scheduled periodically, but no spectrum auction is scheduled for land mobile radio as of the time of the writing of this document.

The Quest for Exclusive Spectrum.

There is some spectrum that can be made exclusive that can be obtained for the cost of the license application.  This is normally available in the rural areas due to the lack of population and not available in the big cities due to the frequency congestion on the existing frequencies that are allocated for the use of land mobile two-way radio.  (Los Angeles is the #1 or #2 most crowded radio market in the country depending upon who’s opinion you respect the most.)  Radio channels for two-way radio use issued by the FCC by default are all shared channels.  There are certain criteria specified by the FCC rules that allow a licensee to obtain and maintain the exclusive use of spectrum for a given distance.  This includes the requirement for the frequency to be clear from co-channel licensees for the required distance on the frequency prior to the exclusive license being granted.  These requirements vary by frequency band and often by service classification.  Typically, this cannot be done in a large city these days unless you get permission from every licensee on the channel within about 100 miles from your location.  Since all of the available channels have multiple licensees, it is a very time consuming task to attempt to get permission from all of the co-channel licensees to have exclusive use rights and it is rarely obtained, especially when most frequencies in the Los Angeles area have between 30 and 100 separate licensees who have to give their permission.  All it takes is one licensee to say no and you cannot get the exclusivity.  In addition, even if they give you permission, their radio transmission can still interfere with your use of the radio unless they actually cease the use of their radios or change to another frequency.  (This process is similar to a real estate developer who targets a city block and starts buying out the various different property owners on the block to build a new expensive development on the entire block which can take years from start to finish and cost a significant amount of money during the long process which has no guarantee of finishing in any reasonable time frame.  The new development cannot be built until all of the property owners sell their land parcel and property to the developer.)  The cost to obtain exclusive spectrum in this manner in a major metro area is significant in terms of cost to buy out existing licensees (if needed), cost to relocate their facilities (if needed) and labor to do all the research, negotiations and follow through.  In addition, during the process of obtaining permission from the existing licensees, nothing stops new licensees from moving onto the frequency and complicating the process of obtaining exclusive use of the frequency.

Advanced radio systems that “claim” to operate on shared spectrum.

Over the years, there have been a multitude of advanced feature radio systems that claim that they are legal to operate in a shared environment on shared channels.  Not one of them has been successful without being in an area that does not have much co-channel congestion or operating in a manner that violates the FCC rules and are thus subject to the following notices from the FCC:

These include systems such as SmartTrunk, IDAS, DMR, IP Mobile Data Systems, Digital Dispatch Systems (DDS) and MotoTrbo Capacity Plus.  Each of these systems will operate on shared channels provided the shared channels have minimal traffic which is virtually impossible to obtain in the LA area.  They have been sold and installed by others and have had to either shut down or significantly modify their operations to stay in compliance with the FCC rules and their operation is severely compromised when programmed to operate within the FCC rules.  As an example, MotoTrbo Capacity Plus has a central control channel that transmits all the time and interferes with co-channel traffic.  However, the system “monitors” the control channel receive frequency (and not the transmit frequency which is considered Type 1 monitoring by the FCC) and if it finds co-channel traffic, it switches the control channel to another frequency at the site.  Whenever the new frequency has the same issue, it switches the control channel to another frequency at the site.  This process continues throughout the day (and night) to prevent undo interference to other co-channel users.  However, this creates problems for the radio system users because each time the control channel switches, it takes a certain amount of time for the subscriber radios to reacquire the control channel during which time there will be missed calls.  Also, since the channels are shared, the co-channel user can interfere with the ability of any subscriber radio to attempt an access to the system.  On busy channels, this occurs regularly (sometimes, hundreds of times per hour) and causes the system to operate poorly.  The service agents typically then program the system to ignore co-channel traffic either partially or completely (which is illegal) in an attempt to drive co-channel traffic off the channel due to the Capacity Plus system causing severe interference to their operation which will incur the wrath of the FCC once the co-channel users complain about the interference.  In such a case, the system operator can be ordered to install Type 2 monitoring which monitors the transmit frequency at a significant cost for the hardware to perform the type 2 monitoring since it cannot be done at the site where your equipment is located because it will only hear your own transmitter which is transmitting all the time.  Additionally, you will need a remote site (including the expense to house the equipment) and backhaul of the monitoring signal to the main equipment site. This will result in a significant reduction in performance of the system due to the type 2 monitoring inhibiting the use of the system.  If you have already purchased such a system, you have a new and potentially “useless” radio system for which you paid a lot of money and now have a significant safety and operational issue without a budget to fix the problem.

The ability to obtain exclusive spectrum changes from time to time based upon new entities applying for licenses and other entities ceasing to use radios and either letting their license expire, changing frequencies or ceasing operations and using another method for communications.  Therefore, the landscape is dynamic and ever changing.  Recently, an attempt was made to obtain some exclusive spectrum for a customer with the expected result.  The frequency coordinator responded with an emphatic “NO EXCLUSIVE SPECTRUM AVAILABLE” for this system.  We used very restrictive set of parameters and were unable to obtain a license.  Using less restrictive criteria for a different type of radio system will fail by a larger margin.

There are alternative ways to operate a radio system without sole ownership of the spectrum.  They are:

Most entities have some cellular phones for use by various key personnel.  Most companies do not own and operate a cellular system for those cellphones.  These companies pay a monthly subscriber fee to a cellular carrier to operate the phones that were purchased for company use.  It is no different in this situation where you are paying a monthly subscriber fee to use the network infrastructure and their radio frequencies from a commercial provider.

I want one simple solution to my radio woes: Rent Radios From MRA