It was in early January 2010 when we were contacted by our customer that their data system was not working.  We looked at the system and determined that we needed to get to Mt Lukens to repair the system.  Under normal circumstances, this would not be a problem. These days, the situation was different due to circumstances beyond our control. 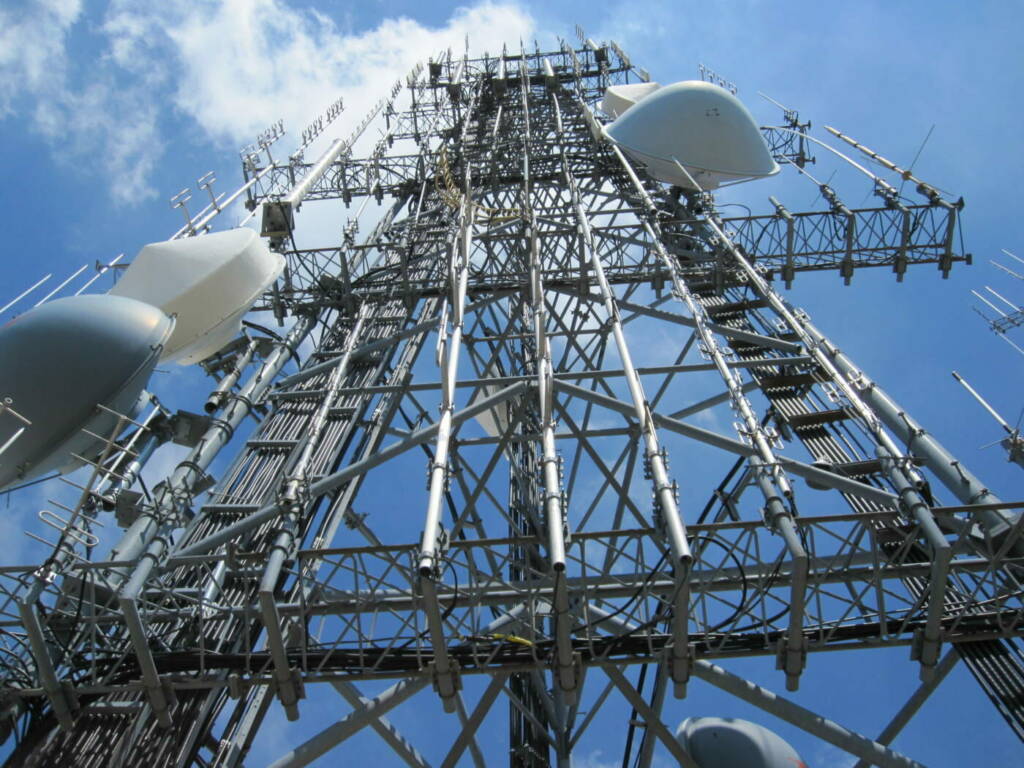 In September 2009, Southern California experienced a most devastating fire known as the station fire.  It was named after its point of origin near one of the USFS stations.  It spread like wildfire and exploded to one of the largest fires in Southern California history.  The damage was immense and widespread.  The power lines that ran through the mountains were burned to a crisp and it would be up to 9 months before all the power was restored that the USFS allowed to be rebuilt.  Some of the power lines that burned down were not allowed to be rebuilt at all, so the users of those power lines had to convert to solar power or not have any power at all.

The power line to Mt Lukens burned down which serviced 10 separate buildings at the site which was heavily used by both governmental agencies and private industry.  After the damage was surveyed by Edison, they indicated that it would be 12 weeks before power would be restored to the site.

Our building at Mt Lukens was powered by our Generac generator which was generally reliable.  It worked for 8 weeks without any attention except for the filling of the propane tanks at which point the generator failed.  This was discussed in detail in the story, “Repairing the Generator On Mt Lukens” in which I have gone to considerable trouble to repair the generator at Mt Lukens.

At this point in time, the power had been restored to the site and we were now running on Edison power.  However, the data controller for our customer stopped functioning normally and needed service.  This could be as simple as a processor lock up that could be cured by a simple reboot of the data controller.  (It also may be something more complicated such as a hardware failure of the controller or a software configuration that needs to be fixed.)  This is a simple thing to do when standing in front of the equipment, but it was an impossible task under the current circumstances in which we did not have access to the site.  This was a time before we had installed internet-controlled outlets which allowed us to reboot remote devices with ease.

When the fire burned through the Angeles National Forest where Mt Lukens is located, it caused considerable damage.  The famous Angeles Crest Highway which provided access to the major portion of the Angeles Forest and the San Gabriel Forest, Angeles Forest Highway which is the alternate route to Palmdale which bypasses Highway 14, access to Mt Wilson, access to Mt Lukens, access to Mt Disappointment, access to Red Box Station, campgrounds and many other areas of the forest was severely damaged by the fire and when the rains came, there were massive mud sides which completely took out a mile of the highway making the entire road disappear.

Caltrans, the California Highway Patrol and the US Forest service all had joint authority over the roadway and had decided to lock the road to prevent access from the public.  A highway patrolman was stationed at the gate to prevent access except under the terms that were in effect at the time.  The rules for access were constantly changing from no access at all to Mt Lukens to access via an escort, to access via a caravan in which we had a specific amount of time to fix whatever we could in the allotted time to access only by helicopter.  The roads to the site were in terrible shape due to the heavy rains and the fact that all the governmental resources were being used to fix Angeles Crest Highway and there was nothing left to work on the fire roads that provide site access once we would turn off Angeles Crest Highway onto the fire road to the site.

When the data system failed, I knew that there was currently no access to Mt Lukens, so I informed the customer that we did not have site access through the normal roads and the only way to get to the site was via helicopter.  I informed the customer of the $1,500 cost of renting a helicopter and they balked over the price.  They told me to try another way first, so I decided to try another route.  I enlisted help from the office to find another way.  We located a company that would rent an off-road motorcycle that could be used to drive to Mt Lukens.  Since Angeles Crest Hwy (which is the main road to the site) was blocked by the CHP, we had to try to go up the alternate road known as Earl Canyon Motorway which starts up the mountain in La Crescenta.  Earl Canyon is not maintained by the USFS on a regular basis since it is an alternate road that is not commonly used.  After the devastating fire, the road was in terrible shape and not passable by cars and trucks.  The question was whether I could negotiate the road on a dirt bike.  I decided to give it a try.

We arranged with the company to deliver the dirt bike to a specific location near the bottom of Earl Canyon Motorway.  These bikes are used for recreation by thousands of people who go out for a day in rural unpaved areas and drive cross country with the bikes.  So, I got the tools and equipment that I needed into a backpack and felt that I was ready to give it the old college try.  The rental company then arrived with the dirt bike, unloaded the bike at which time he proceeded to show me how to ride the bike.  I was a quick learner from the standpoint that I had ridden bicycles extensively and understood the issues of a 2-wheel vehicle.  However, learning about the throttle and other items on the dirt bike kept me on my toes and kept me on edge without sufficient time to absorb all the material and translate them into instant actions.  Every time something happened, I had to think about what needed to be done to handle the situation and I was often reacting too little and too late to the situation.

The road had many challenges along the way.  There were numerous ruts in the road that I had to avoid.  Lots of bumps, washboards, moguls, washouts and plenty of places where portions of the road were missing.  Each of these obstacles had to be negotiated or avoided on my way up the mountain.  After about 3 miles, the Earl Canyon Motorway merges into the Mt Lukens Truck Trail which would be another 4 miles up to the top of the mountain, but I never got to the Mt Lukens Truck Trail.  There was a dirt slide where the dirt slid across the road and to get past the slide, I would have needed to ride the slide.  If I had been proficient on the dirt bike, I would have tried to cross the slide, but I was concerned that the bike and I would be going off the side of the road down into the canyon 500 feet below.  You can say that I was prudent to recognize that I was over my head, while others would say that I had chickened out or wimped out.  I prefer the explanation that I was prudent.

Now it was time to head down the portion of the mountain that I had climbed.  I found out that it was even more difficult to head down the mountain than to climb up the mountain on the dirt bike.  Each rut, bump, mogul and crevasse posed its unique challenge that proved beyond a shadow of a doubt that I never should have tried this stunt.  By the time I managed to get to the bottom of the road, I was exhausted and gave thanks to God for giving me the wisdom to know that I was in trouble and to protect me from harm.

I called into the office to have them tell the rental company to come and get their dirt bike.  I waited there until they arrived, loaded the bike on the trailer and proceeded to leave.  Now it was time to head to the Van Nuys airport to catch a helicopter to Mt Lukens so that I could perform the necessary repairs.

I arrived at the Van Nuys airport about an hour later after getting something to eat and cleaning up from my ordeal.  I grabbed the backpack with my tools and equipment, met with the helicopter company personnel and proceeded to go to the helicopter and get ready for takeoff.  After going through the normal pre-flight checklist, we took off and headed to Mt Lukens.  The mountain is about 35 miles driving distance to the site.  However, by helicopter, it is just over 15 miles which takes about 10 minutes.  Helicopters charge a huge amount of money for the time that the helicopter rotor is turning.  They charge a nominal amount of money for standing time in comparison to the rotor time, so if I need 2-3 hours to take care of the problem, the bill will not get significantly larger compared to the basic bill for getting there in the first place.  However, that does not mean that I want to waste a lot of time at the site. 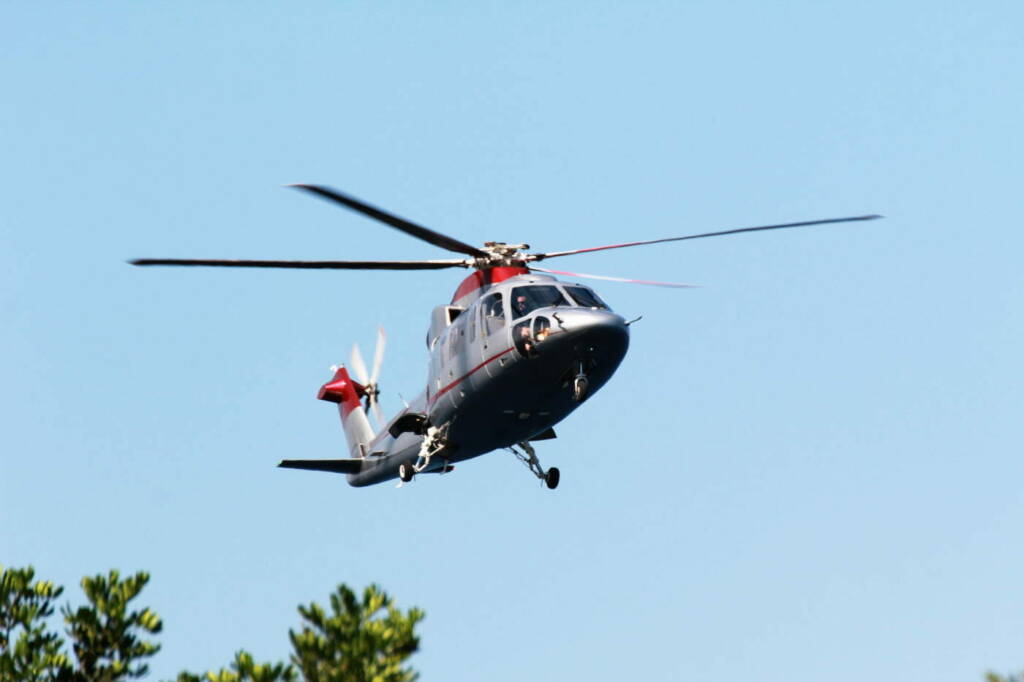 It was not the first time that I flew to Mt Lukens.  Twice before we went there by helicopter; once for taking aerial pictures of the site and one other time to perform repairs when the site was inaccessible by ground vehicle.  We arrived at the site around 3PM at which time I had to grab my backpack and walk to the building.  At many sites, the helicopter landing area is either non-existent or is far away from the building which requires a significant walk.  I was lucky in that we landed about 150 feet from the building.

I opened the door with the key which I remembered to take with the tools and test equipment.  I entered the building, turned on the lights and proceeded to walk over to the customer’s equipment.  The problem was obvious from inspection once I was able to listen to the local speaker and look at the lights on the front of the equipment.  I was able to take care of the issue within a few minutes.

It was time to walk around the building looking for issues that could be handled in a short period of time.  I walked up and down each row of equipment looking for anything that needed attention.  I checked the air conditioning and the generator at the site.  I walked around the building looking for anything that seemed to be wrong.  After my routine checks, I gathered my tools and equipment, placed them back in the backpack and proceeded to code out with the alarm company and lock the door.  I then walked back to the helicopter.  Total time on the mountain was less than 30 minutes.

The flight back to the airport was uneventful.  It was a smooth flight and landing.  I grabbed my backpack and keys and headed back to the car after taking care of the paperwork with the helicopter company.  It was time to go home for the day as I now had the privilege of fighting Los Angeles traffic to go home.