What is a Walkie Talkie? 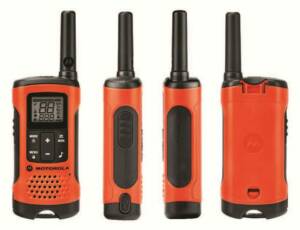 Also known as a portable radio, HT (Handheld Transceiver), or Handy Talkie. Recently the term has become equated with the low end FRS radios but that is not really accurate. FRS refers to a particular band while the term “walkie talkie” refers to any type of handheld radio. The question is often posed on social media if a walkie talkie will communicate with a ham radio, GMRS, cell phone, police, or other services. This is a misuse of the term since it is slang for any type of portable radio. Originally radios were large devices requiring much more space and power. They were originally used in the form of base stations and ships radios because of the requirements. The original radios used high voltage transformers and vacuum tubes. Moving to mobile radios required adapting a car 12 volt system to provide what was needed for the radio and it wouldn’t last long on the battery without the engine running. As batteries improved and there was greater use of transistors, smaller more portable radios were possible. In the 70s many walkie talkies were manufactured in the CB (Citizens Band). Other versions were built for Emergency Service and Commercial use. Today they are built for those purposes as well as MURS, GMRS, FRS, Amateur Radio and others. Some require licenses while others do not. Most require a radio that is approved by the FCC for that purpose.

So when considering the purchase of a Walkie Talkie it is important to know what you intend to use it for, the range and terrain that you will need to talk over and the FCC requirements for the band you intend to use. You can buy the FRS radios at many stores and use them. MURS radios are also license free, usually purchased from specialty vendors. GMRS requires a license. Amateur radio requires a test for the license and can’t be used for commercial purposes. LMR (Land Mobile Radio) bands require a license, either for your organization, or provided as part of a service. Public Safety bands require authorization from the licensed agency. Each type of walkie talkie communicates with it’s own type, FRS with FRS, CB with CB, LMR with LMR and so on.